The Prayer for Christian Unity 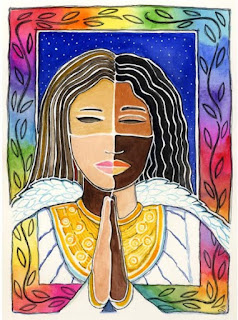 Paul’s desire for unity in the church was expressed often.  He warned the church to ‘watch out for those that cause division and put obstacles in your way’ (Romans 16:17).

In John’s Gospel, Jesus prays for His disciples as well as us that we may be ONE.   This oneness is a unity that is based on purpose and mission.    Jesus said that “they may be as one as we are one….so that the world may believe” (John 17:21)

The unity and relationship between Jesus and the Father and the Holy Spirit has been an interesting discussion since the beginnings of the Church.   While we believe in just one God, we acknowledge that there are three persons in the one God.    This triune God is One but obviously not the same.

The same should be said of us; we are not the same but can still be one.  Unlike the Trinity, we are frail and weak so we often get it wrong.  However, we need to strive for unity while still enjoying the diversity and variety within this movement we call Christianity.

All too often, Christians can’t understand Christian unity apart from sameness or uniformity.  That was the big problem with the early Church.   While it started off so well and there was a great understanding  of what Christ had accomplished and of one mission and one purpose unity quickly went off the tracks.  The church leaders decided that unity was to be expressed in conformity and sameness.   Liturgies were written, prayers prescribed, doctrine decreed and rules established.

Today we often do the same.  We pray and often pay lip service to Christian unity but are unwilling to consider that we can have differences in our worship style or even some of our doctrines but still have unity.  We can still be one with Jesus as our Savior and can still have the same purpose and mission.    There isn’t any one group or denomination that get’s it wrong; typically we all get it wrong. Personally I’m not really sure how to define unity but I certainly smile when I see it.

Back about 30 years ago (seems like just yesterday), Russ Taff wrote and sang, “We Will Stand” that has these memorable verses:

The day will come when we will be as one
And with a mighty voice together
We will proclaim that Jesus, Jesus is King
And it will echo through the earth
It will shake the nations and the world will see, see that

You're my brother, you're my sister
So take me by the hand
Together we will work until He comes
There's no foe that can defeat us
When we're walking side by side
As long as there is love we will stand