I've been a fan of Victor Hugo's epic French novel since I was in college.

There was something about the drama.   I love the historical setting of 19th century Paris and I'm intrigued by likely one of the most famous characters in literature, Jean Valjean.   I had the opportunity to see the stage play again this past weekend with my wife and my parents at a little community theater in Ocala.  They did a great job but this is not about their thespian skills.

In the above clip we see the act that leads to the redemption of a man, Jean Valjean, a peasant imprisoned and sentenced to indentured servitude for stealing a loaf of bread.  His crime, while possibly minor, merited a punishment.   Like most of the people of Paris in the early 19th century, Jean Valjean's life is miserable (hence...les miserables).   The poor, the downcast and the needy are judged to be inferior.  They are inferior to those that are judged to be superior.  This includes the rule keepers, the police and the nobility.

The change in Jean Valjean came at the hands of a priest, a man of God.   This priest ransoms him with silver and tells him that his life now has meaning.  He must now live a changed life.

This amazing epic drama touches my heart.    It reminds me of the universal human condition that we are all helpless, we are all inferior, we are all broken and in need of redemption.

The Christian overtones in the play are clear.  The redemption of mankind also comes at the hand of a priest.  Not an earthly priest however, our redemption was paid for by Jesus Christ on calvary.   The offer of redemption is simple: accept that the price has already been paid and understand that you have been ransomed, you have been redeemed. As a result, we are to live a life that now has meaning.  This is to be a life that is honoring to God.

While in the stage play, Jean Valjean does change,  police inspector Javert continues his chase of the former convict 24601 and only has punishment in mind.  In his way of thinking people don't change.   Grace does a work in Jean Valjean's life but there is no grace in Javert.  Even when his life is spared by the changed Jean Valjean, Javert cannot find it in his heart to change, to repent and to accept grace as an opportunity.

It has been said that all great literature has Biblical roots.  Perhaps the reason is that the primary issues of life are addressed through Biblical characters.   Redemption, grace, forgiveness and restoration are available and the primary source is the Bible.

A Lesson from James 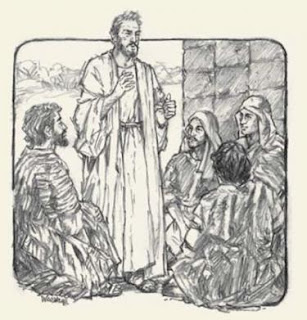 I don't know about you but it seems like we all get tested.

Whether it's something that we know is coming and perhaps even have the time to prepare, or it's something sudden like a sickness or even the death of a loved one, a financial hurdle or the loss of a job, testing comes often.

How we deal with the tests are more important than the difficulties themselves.   Regardless of how difficult the trial or the test, the way we respond is actually more important.

The book of James is one of my favorite books in the New Testament, likely because it just seems like so much common sense.  Perhaps the reason it is common sense rather than a theological work is because James was the half-brother of Jesus.   The Bible tells us that James and his brothers, Joseph, Simon and Judas were not followers of Jesus early ministry (John 7:5).   Scholars believe that Jesus likely appeared to James after the Resurrection because James, his mother Mary and his brothers were in the upper room on the day of Pentecost.   James decision to follow Jesus was because he had proof.  He had certainly not been as wise or as learned as his older brother, but he was street smart.

This is what James had to say about trials:

Consider it pure joy, my brothers and sisters, whenever you face trials of many kinds,  because you know that the testing of your faith produces perseverance.  Let perseverance finish its work so that you may be mature and complete, not lacking anything.  If any of you lacks wisdom, you should ask God, who gives generously to all without finding fault, and it will be given to you. (James 1:2-5)

So testing produces perseverance.   My definition of perseverance is the ability to continue to do something even when it is difficult.   I’d also say it’s summed up in the saying “when the going gets tough, the tough get going”.

When we persevere, the Apostle Paul said in Romans 5:3-4 "perseverance produces character; and character hope."

So when we have difficulties we have the opportunity to develop both our character and also hope.   I’ve found that in the long run, most of the stuff that we worry about and fuss about doesn’t matter.  What matters is character.   If we have the character that Jesus wants to produce in us and through us then we have the best hope of all.