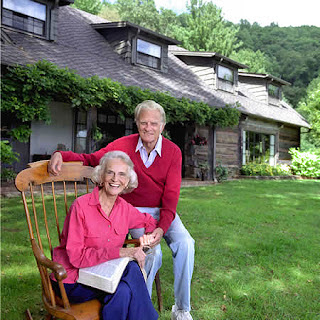 It's difficult to put into words a fitting tribute to Ruth Graham.

Much has been said already about this wonderful woman of God who faithfully followed God's call on her heart to support, encourage and provide much of the vision for the extraordinary ministry of Rev. Billy Graham.

For six decades, Ruth Graham has been not only the wife and mother of his children but also the best friend to her world acclaimed evangelist husband, the Rev. Billy Graham.

I can only imagine the pain and the sense of loss for Billy Graham to announce this past week that his “soul mate” was nearing death. The family was able to all gather together at her bed side and share the last moments together, this side of glory.

"Ruth is with Jesus" is one of the headlines that I read from a secular newspaper as I looked for inspiration in trying to write this tribute. The comment "Ruth is with Jesus" caught my eye and I couldn't help but smile as I thought of the tremendous impact that she and her husband have had on the people of this country and around the world in sharing the love of Jesus Christ and the power of the Cross, since their marriage in Montreat, North Carolina in 1943.

It's so amazing to see Montreat again as the location for the public memorial service scheduled for 2 p.m. this Saturday at the Montreat Conference Center. The Graham family certainly knows how to put down roots and while I never had the priviledge of meeting Mrs. Graham, I'm still in awe of how well she was able to keep her family together!

One of the books on my library is "Just as I am" the autobiography of Billy Graham. Being in Christian ministry, I suppose it's seems like a cliché for me to say that Billy Graham is one of my heroes. It would be like one of the GOP presidential candidates saying that he liked Ronald Reagan. At the same time, it's hard to find anyone quite like Billy Graham, or anyone quite as supportive and loving as his beloved wife, Ruth.

In this autobiography, Billy Graham included a chapter entitled, "A Half-Century of Friends". In it Billy Graham recalls that over the (then) fifty years of his ministry, most of the time he and his wife Ruth were not ministring to "famous" people. While they were most known for their friendship with presidents, prime ministers, kings and queens, Billy said that 98 percent of the people that they ministrered to were not the "rich and famous". Instead, they were those who they shared what Billy Graham called the "central theme of the Christian Faith: God's forgiveness in Christ is available to all no matter who we are or what we have done."

I thank God for Ruth Graham. God thank you for giving her to Billy, allowing her to be his partner, his wife and his "soul-mate". May God give us even a portion of the grace that she has. 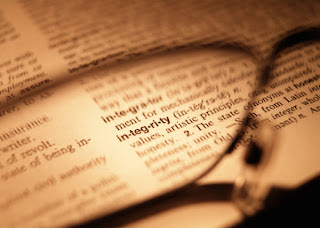 The latest results from Gallup’s annual "Values and Beliefs" poll are in. According to Gallup, “Americans are very pessimistic about the current state of moral values.” (I guess we are to be surprised.) Gallup's survey was based on telephone interviews with 1,003 adults and indicated that only less than 20% of those surveyed believed that the moral values of the country are positive and nearly 50 percent felt that the morals of the country are “poor.”

It's easy to respond that there is a general environment of "poor" values, ethics or integrity when you ask a general question about other people. Here is the question that was asked by Gallup:

"Thinking for a moment about moral values: How would you rate the overall state of moral values in this country today -- as excellent, good, only fair, or poor?"

Let's see if we can rephrase this question:

"Thinking for a moment about your moral values: How would you rate your personal integrity - excellent, good, only fair, or poor?"

You see, when the issue of Integrity becomes personal, it becomes a little more relevant doesn't it? Now, asking this question may get a little sticky. We don't know whether people have the integrity to answer a question about their own integrity with integrity!

But at least there would be no confusion about the question.

When we talk about other people's integrity, it's easy to miss the point. Those people are likely not accountable to you. Politicians of course are in an entirely different category so we won't comment on politicians.

But what about you?

What is your integrity like at work? Do you do walk the walk or merely just talk the talk? Do you misrepresent the facts, even a little to the boss? Are we faithful in the "little things" as Jesus talked about in the Gospel of Luke?

I've had the great opportunity to spend some time working with some of the "down-and-out" at a men's shelter in Pittsburgh. After my first visit, I learned much about communicating with these men. They didn't need to be reminded of their vice, just the opportunity to turn to a Savior. They knew they had fallen short, they just needed to be encouraged to reach up for help.

Integrity is terribly important. At home, at the office, with our children, our spouse, our friends and in public, our integrity, or the lack of integrity is often the primary cause of both blesses and curses.

Dr. Henry Cloud comments in his book Integrity: the courage to meet the demands of reality, that integrity can be defined "as the state of being whole and undivided."

We'll look at Integrity often in this Blog as I'm convinced that it is the most misunderstood character quality and actually the most likely to have an impact....both for good or for evil. 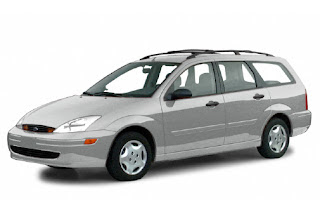 I happened to look down at my odometer today and saw my little ministry-provided 2002 Focus was turning 80,000 miles. Now, I realize that this milestone may not be a "big whoop" for many of you. I know a few people that have that many miles on a two-year-old car and also have met people that have well over 200,000 miles on their car...but for me, it's a milestone.

You see, for most of my adult life, I was a Ford employee. Ford and "Generous Motors" our rival across the freeway in Detroit were both known for providing good company benefits including great opportunities to buy, lease and drive new cars. As a result, our family always had pretty new cars. When I left the company I turned in two new cars that my wife and I drove and also called my daughter and had her turn in her Ford Explorer at the local Ford dealership in Illinois.

While it was always fun getting a new car, sometimes it was a little ridiculous. Back in the late 1980's, Ford had a small problem selling all of the cars we built (a reoccurring problem actually) and Ford company car control was "turning" the sales cars in the fleet, two and three times a year. As a result, I had three different 1989 Lincoln Continentals in a twelve month time frame. I remember loaning one of them to my Pastor and his wife on a couples retreat and he confessed later that he enjoyed driving it but intentionally parked it a block away so no one would accuse them of living "high-on-the-hog".
So, my having 80,000 miles on a great-running, nice looking silver Ford Focus is kind of a milestone for me. Most of my friends would understand and certainly agree that driving a five-year old compact car doesn't make you feel any less of a "success" than if I you were driving a new Lincoln Continental (they are Fords after all).
I'm reminded of that verse in Psalm 37: 25, "I was young and now I am old, yet I have never seen the righteous forsaken or their children begging bread." This entire Psalm is a response to that often asked question,"why do the wicked prosper and the good suffer?" Psalm 37 answers in verse after verse, that the present situation is only temporary--God will untimately reverse things, rewarding the good and punishing the wicked.
The thing that I like is that God can also reverse your thinking. God will bless you and allow you to understand that He has provided everything for you to enjoy and that our focus (get the pun?) is to be on the people we get to love and care for and not the things that are strictly material, and will ultimately just rust away and really don't matter.