"He Descended Into Hell" 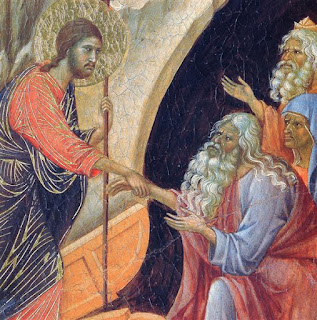 One of the lines in the Apostles Creed that often bothers people is the phrase "He descended into hell." The Apostles Creed is ancient, dating back to the 4th century, and while not considered authoritative or inspired in the same way as the Bible, it is still read in many of our churches on a regular basis.

I was recently leading a Bible study in Ephesians for and came across one of the verses that often brings up this same occurrence:
“But to each one of us grace was given according to the measure of Christ’s gift. Therefore He says: “When He ascended on high, He led captivity captive, and gave gifts to men.” (Now this, “He ascended”; what does it mean but that He also first descended into the lower parts of the earth? He who descended is also the One who ascended far above all the heavens, that He might fill all things.)” Eph 4:7-10
While the theme of these verses from Ephesians 4 are about the gifts that were given by God to man, these and other verses in the Bible are often used to address what appears to be the time after the crucifixion of Jesus Christ but before His resurrection.
Two men I admire greatly have completely different opinions on Jesus “decent into hell."
·       "Faithfulness to all of Scripture, however, requires us to deny that Jesus’ spirit went to hell after He died.” (Ligonier – RC Sproul) and

·       “Scripture clearly teaches that the old testament saints were kept in the Bosom of Abraham, (Paradise) which Jesus visited, preached and set the captives free (Grace to You – MacArthur)

One of the often-mentioned verses related to this subject is Jesus reference to the bosom of Abraham in what is known as the “Rich Man and Lazarus” (Luke 16: 19-31)
19 “There was a certain rich man who was clothed in purple and fine linen and fared sumptuously every day. 20 But there was a certain beggar named Lazarus, full of sores, who was laid at his gate, 21 desiring to be fed with the crumbs which fell[d] from the rich man’s table. Moreover the dogs came and licked his sores. 22 So it was that the beggar died, and was carried by the angels to Abraham’s bosom. The rich man also died and was buried. 23 And being in torments in Hades, he lifted up his eyes and saw Abraham afar off, and Lazarus in his bosom.
24 “Then he cried and said, ‘Father Abraham, have mercy on me, and send Lazarus that he may dip the tip of his finger in water and cool my tongue; for I am tormented in this flame.’ 25 But Abraham said, ‘Son, remember that in your lifetime you received your good things, and likewise Lazarus evil things; but now he is comforted and you are tormented. 26 And besides all this, between us and you there is a great gulf fixed, so that those who want to pass from here to you cannot, nor can those from there pass to us.’
27 “Then he said, ‘I beg you therefore, father, that you would send him to my father’s house, 28 for I have five brothers, that he may testify to them, lest they also come to this place of torment.’ 29 Abraham said to him, ‘They have Moses and the prophets; let them hear them.’ 30 And he said, ‘No, father Abraham; but if one goes to them from the dead, they will repent.’ 31 But he said to him, ‘If they do not hear Moses and the prophets, neither will they be persuaded though one rise from the dead.’”
The teaching referenced by the Apostles Creed and many other verses is that Jesus that ascended after he descended.  This is that Jesus died and like the faithful in the Old Testament (i.e. Lazarus) went to the heart of the earth (Abrahams Bosom, also called Paradise and sometimes Hades and even Hell).  Many Bible scholars teach this was a ‘holding place’ for those under the law that were trusting in God.  The key to the release from this holding place was the death and resurrection of Jesus Christ – as the Messiah, the key to being justified apart from the works of the law.
When Jesus rose from the dead, he took those souls that were in the Bosom of Abraham with him.   It appears that some stopped off at the earth (As Jesus did on the day of His resurrection).  Matthew 27:53 has an interesting and unique account “They came out of the tombs after Jesus’ resurrection and went into the holy city and appeared to many people”
It's possible the reason that the late RC Sproul and others have a problem with the wording in the Apostles Creed “He descended into Hell” and this particular teaching also found in Acts 2:24, John 5:25, 1 Peter 3:18-22, Zachariah 9:11, and Colossians 2:15 is because it provides an opportunity to misunderstand the necessity and sufficiency of Jesus death on the cross.
From my perspective, the teaching of a literal “Bosom of Abraham” and the release of the captives by Jesus himself after the crucifixion fits into the Biblical narrative of salvation through by faith alone, in Christ alone, by grace alone.