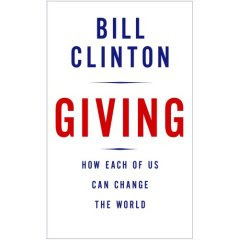 I picked up a copy of Bill Clinton's book this last week at the San Jose airport. I also made a note to myself to stick to Amazon than airports when buying books. I don't like overpaying for books but needed something light to read and I had read the latest from Michael Crichton in paperback.
I don't usually do book reviews and this isn't one really either. I can say that the sub-title "how each of us can change the world" is a good summary of the book and one of those things to which I'll say "amen"! The former President did a good job of painting stories that told how individuals, both the great and small, made huge contributions by giving of their time, talent and treasure. It was to be inspiring and I believe the reader will be inspired which is a good thing.
Yes, Bill uses those words, "Time, Talent and Treasure" when he talks about giving. He has a good understanding of giving in that it is a matter of the soul, a matter of personal involvement, and not just wealth.
Unfortunately, The book was also classic Clinton (my guess is that he wrote the intro, first chapter and dictated some of the stories about Al Gore and Hillary). The former president is campaigning to be first husband and he refuses to be transparent or anything remotely humble. It's too bad as he is a brilliant man who has made many positive contributions to society.
Typically when I hear personal testimonies about giving, there is usually personal struggle that is overcome, some realization that life is more than just self absorption and self indulgence. Not the case in this book.
The President starts off telling us of his heritage and how he was taught to tithe at an early age. He mentions that he has always been motivated to give back as he has been given much. In comparison however, Hillary, he says, is the real giver, always active, always caring and compassionate.
Since this was a "general audience" book, I knew that it wasn't likely to include any reference to giving to the work of the kingdom "first" but I'll try to be charitable as well and give him the benefit of the doubt when he talks about his giving. We know that for a while when he was President, his tax returns didn't indicate that Mr. and Mrs. Clinton were known for their charity. I do seem to remember something about gifts of underwear, which are now prohibited from being a charitable gift by the IRS.
While I smiled while reading the stories (there were many, many stories) It was mainly the political undercurrent that made the book less enjoyable. I personally think there is a big difference between giving to causes that directly benefit hurting people and those causes that are primarily political and government solutions. I didn't count the number of references to Greenpeace, global warming, Al Gore or Hillary but just a few were enough to make the read a little less appealing.
Americans are generally givers and it's good to hear some positive stories. People make a real difference when the reach out and help people that are desperate - people that are hungry, naked, thirsty and in the hospital or even in prison (Matt 25). Our churches and nonprofit ministries are great venues for people to get involved, give and volunteer to make a difference.
- September 18, 2007