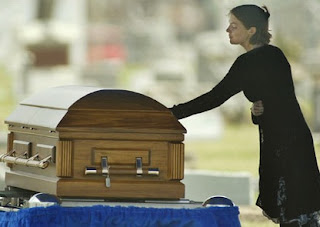 I am a lifelong Catholic, but my husband is Baptist. Is it ok for a Catholic to be buried in a Baptist cemetery or any other, and does it matter as long as it is blessed?

That's a good question and thanks for your email.

For a Christian, death is not the final chapter as we have the evidence of a resurrection because of Jesus resurrection from the dead. While many fear death, we are reminded in the Bible that we actually have eternity ahead of us and that Jesus has gone to prepare a place.

Just before Jesus was to be crucified, his disciples became anxious as he told them what was about to transpire. In John 14:1-4 Jesus tells them, “Do not let your hearts be troubled. You believe in God; believe also in me. My Father’s house has many rooms; if that were not so, would I have told you that I am going there to prepare a place for you? And if I go and prepare a place for you, I will come back and take you to be with me that you also may be where I am. You know the way to the place where I am going”

So for the Christian, one who has believed and embraced the life, death and resurrection of Jesus Christ, our future is secure regardless of the cause of death or the place of interment.

While the medieval church introduced many elaborate burial rites including a mass, prayers and specific consecrated burial sites, it has no impact on the fact of eternal life with Jesus Christ.

Baptist, Catholic and other denominations are just that...denominations. If you look in your purse or wallet you likely have some US currency, some money. US currency comes in many denominations - $1, $5, $10 and even coins. However, it is all backed by the full faith and confidence of the US government.  In like manner, our Christian denominations should not divide us as we all agree in the essential beliefs in the Father, Son and Holy Spirit, the Virgin Birth, Jesus death at Calvary, his Resurrection and Ascension and also in his Second Coming.

A Wakeup Call to the Church 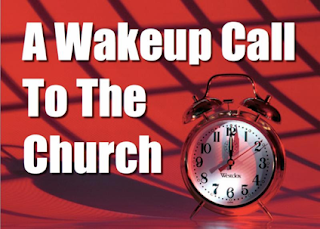 American culture has been changing rapidly and the rate of change is increasing exponentially.

For example, just one group, the so-called “nones,” who are those religiously unaffiliated people, have grown from a relatively insignificant few historically to more than 16% of the population in 2007 and then to almost 23% of the population in 2014. Pew Research Center’s massive 2014 Religious Landscape Study makes it clear that this trend is real and accelerating – particularly among the young and younger adults.

These trends should be a wakeup call to the Church.  I’ll step out on a creative but also theological limb and say that this trend is actually predicted in scripture.  My premise is based on historical Christianity as well as the prophecies concerning this very time known as the latter days.  It is during these latter days that the Church is told to wakeup.

If we are talking about the latter days that means we have to take a quick tour through one of my favorite books of the Bible, the Book of Revelation, officially known as the Revelation of Jesus Christ.

So why does the church need to WAKEUP?

“And to the angel of the church in Sardis write: ‘The words of him who has the seven spirits of God and the seven stars. “‘I know your works. that you have a name that you are alive, but you are dead. 2 Wake up, and strengthen what remains and is about to die, for I have not found your works complete in the sight of my God. 3 Remember, then, what you received and heard. Keep it, and repent. If you will not wake up, I will come like a thief, and you will not know at what hour I will come against you. 4 Yet you have still a few names in Sardis, people who have not soiled their garments, and they will walk with me in white, for they are worthy. 5 The one who conquers will be clothed thus in white garments, and I will never blot his name out of the book of life. I will confess his name before my Father and before his angels. 6 He who has an ear, let him hear what the Spirit says to the churches.’

It is specifically the Church in Sardis that is told to ‘wakeup’.

Each of the Churches in the Book of Revelation have a name and like many names, there is a meaning to the name.  For example, we know that Philadelphia means “Brotherly love”, The word Smyrna is taken from the word Myrr, that was used in burial.  The name Sardis comes from the Greek word ‘sardeis’, the plural form of ‘sard’, and the meaning of the name is "those who come out.”   This is significant because the idea of coming out is one of the key identifiers of this particular church age.


Historically, many theologians believe that the church at Sardis was representative of a segment of the overall church beginning in 1517 A.D.  This Church age began when Martin Luther nailed his “Ninety-Five Theses” on the door of the Church of Wittenberg in Germany, outlining his grievances against the Papacy and Roman Catholicism.  From 1517 forward, the Protestant church came out of the Catholic church.

“that you have a name that you are alive, but you are dead” (Rev 3:1)
Let's look again at the specific words being used.  Strongs 3686 is the Greek word onoma that is being translated here as the word "name".

Onoma in Greek is used in the same manner as our word "name."  Many have heard the political word RINO (Republicans in Name Only) and also 'Nominal' Christians using the same root word.

Note that this church is referenced by this word onoma which is the same root word we have in Denominations.   The church becomes DEAD when more people are interested in their particular denominational difference than the fullness that is found in the essential gospel of Jesus Christ.

Onoma indicates a church made up of people who outwardly professed Christ -- probably many of them thinking of themselves as believers -- but who actually possess no spiritual life. They are Christians in name only.

"Be watchful, and strengthen the things which remain, that are ready to die: for I have not found thy works perfect before God. Remember therefore how thou hast received and heard, and hold fast, and repent." (Rev 3:2)

When you are living in a PAGAN society, it is very easy to begin to embrace the PAGAN ways

Ancient Corinth was infamous for its wanton sexuality. Paul included among the common sinful lifestyles in Corinth "the sexually immoral," "adulterers" and "men who practice homosexuality" (1 Corinthians 6:9). Some Corinthian believers were even among those groups before their conversions. But when Paul preached the Gospel there, "many of the Corinthians hearing Paul believed and were baptized" (Acts 18:8).

Repentance is not a common practice in the church today. It is thought to be something for the nonbeliever, a once-for-all action that is primarily an act of the will necessary for salvation.  But is this actually to be our experience with repentance?

We need repentance rather than reactive disengagement or reactive entanglement

How do we live in a society that is becoming activity hostile to Christians?  I would say it is neither through reactive disengagement or reactive entanglement.  That is however a conversation for another time.

ho are we to associate with?"   Paul answers this question in First Corinthians 5:9-13 (NIV)

I wrote to you in my letter not to associate with sexually immoral people— 10 not at all meaning the people of this world who are immoral, or the greedy and swindlers, or idolaters. In that case you would have to leave this world. 11 But now I am writing to you that you must not associate with anyone who claims to be a brother or sister but is sexually immoral or greedy, an idolater or slanderer, a drunkard or swindler. Do not even eat with such people. 12 What business is it of mine to judge those outside the church? Are you not to judge those inside? 13 God will judge those outside. “Expel the wicked person from among you.”

Back to the church of Sardis

“Come like a thief”…do those words mean anything to you? here is a refresher:

"Now about the times and seasons, brothers, we do not need to write to you. For you are fully aware that the day of the Lord will come like a thief in the night. While people are saying, “Peace and security,” destruction will come upon them suddenly, like labor pains on a pregnant woman, and they will not escape.…(1 Thes 5:1-3)

Yes, this is an end time Church.

Thyatira (Roman Church) “Behold, I will cast her onto a bed of sickness, and those who commit adultery with her will suffer great tribulation unless they repent of her deeds”.…Rev 2:22

Sardis (Denominational/Dead church) “I will come like a thief, and you will not know the hour when I will come upon you. Rev 3:2

Philadelphia (the Missional Church)  ”Because you have kept My command to endure with patience, I will also keep you from the hour of testing that is about to come upon the whole world, to test those who dwell on the earth.” (Rev 3:10)

Laodicea (Lukewarm Church) Behold, I stand at the door and knock. If anyone hears My voice and opens the door, I will come in and dine with him, and he with Me. (Rev 3:20)

Its Time to Repent:

1 Peter 4:17 For the time is come that judgment must begin at the house of God: and if it first begin at us, what shall the end be of them that obey not the gospel of God?