This past week, about 450 students and 100 volunteers have been living in Belle Glade, making an impact on the community. In addition, another 100 or more volunteers have been making sandwiches, preparing over 1700 meals daily. It's a big effort but the need is big as well.

One of the great developments in the past few years is the partnership with the City of Belle Glade and the Palm Beach County Sheriff’s Department. These government agencies along with local area churches help rally the community support. This year, we are anticipating that we will be distributing school supplies on our last day to over 700 students. During the week, our VBS program will be reaching 100-135 students. Students are helping to clean up our new Ministry Center, a 18,000 sq. ft. open building in the middle of the city. Cleaning out old tiles, pieces of wall board and hundreds of bags of debris will make room for ministry to the community in the near future.

The Belle Glade Ministry project is a joint project of Christ Fellowship's Life Mission Department, our Student Ministries and our Children's Ministry that had the opportunity to do some advance work in the community with the 4th and 5th grade students and have been collecting school supplies for the community. Our youth leaders and pastors put on a 're-cap' every night, I've included one from Day Three (above).

I had the opportunity today to talk with Belle Glade Commissioner William Greer who has a great heart for the community. He was born in Belle Glade, served over 20 years in the Marines and is now back to make a difference in the town that his dad once served as Mayor.

Partnerships with the local community will help the Church succeed where others have failed. Please pray for our students and for the difference they will make in the community of Belle Glade. These students will have the opportunity to impact our world with the love and message of Jesus Christ - everyone. everyday. everywhere.

The Rule, not the Exception 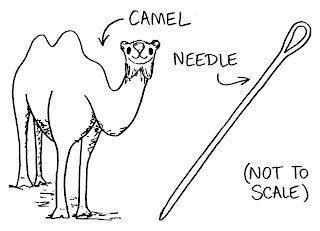 As He (Jesus) was setting out on a journey, a man ran up, knelt down before Him, and asked Him, "Good Teacher, what must I do to inherit eternal life?"

"Why do you call Me good?" Jesus asked him. "No one is good but One-God.

You know the commandments: Do not murder; do not commit adultery; do not steal; do not bear false witness; do not defraud; honor your father and mother."

He said to Him, "Teacher, I have kept all these from my youth."

Then, looking at him, Jesus loved him and said to him, "You lack one thing: Go, sell all you have and give to the poor, and you will have treasure in heaven. Then come, follow Me." But he was stunned at this demand, and he went away grieving, because he had many possessions.

So they were even more astonished, saying to one another, "Then who can be saved?"

Looking at them, Jesus said, "With men it is impossible, but not with God, because all things are possible with God."

Some will say that Jesus says this because the man was very unique and that he was looking to the law, trying to earn his salvation. Some will say that the idea of the man being told to give up everything he had to follow Jesus was the exception, not the rule.

I doubt that is the main reason for this passage. I believe, these verses are not about the exception but the rule. Let’s look again at the passage and find FIVE RULES that Jesus emphasizes 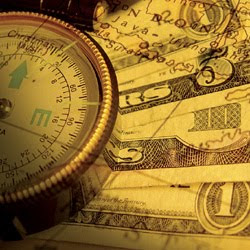 I was recently invited to a seminar on the 21st with Dave Ramsey called, “The Great Recovery”. He and a number of church leaders are calling people to embrace Biblical Principles regarding debt, spending, and consumption.

I’m not sure exactly what the seminar will propose but I can assume it won’t be political. We have tried political solutions to problems for years but politics is not the answer, God is the answer.

We certainly need God in our finances. If you are like most Americans, home equity was the source of most of your net worth. As home prices have shrunk the equity Americans have in their homes to nearly the lowest percentage since World War II.

According to the Federal Reserve, average home equity plunged from more than 61 percent at the start of 2001 to 38 percent in the January-March quarter of 2011. For years, Americans have put their hope in a financial plan that said to borrow money, leverage a small down payment and reap a huge windfall on rising home prices.

Over 4.5 million foreclosures have dashed that dream. Millions are looking for a better way.

The better way is and will continue to be the Biblical principles that many of us have advocated, even if we haven’t been really good at following our own advice. 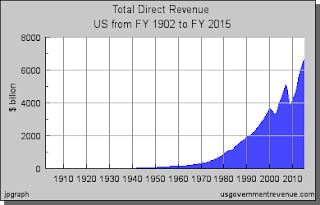 We are still living in a very blessed country. Revenue to the US Government continues to increase. The graph above illustrates that total Government revenue has increased in the US geometrically in the past forty years growing from less than $900 billion to over $6 Billion. This increase in revenues couldn’t keep up with the insatiable appetite to spend which resulted in our $14 trillion debt.

God has a better plan.

If you are interested in hearing more about the Great Recovery seminar coming up in a few weeks, here is the link http://www.thegreatrecovery.com/