Serving vast needs with limited funding means faith-based nonprofit organizations must make some tough decisions about how to spend their money. But annual membership in the Evangelical Council for Financial Accountability in Winchester is one budget item that many Christian organizations won’t skimp on, even though it can be costly.

Most of the expense is invested in an independent financial audit, which members must have on an annual basis to earn accreditation from the ECFA. For modest-sized organizations, an audit can cost $5,000 and up. And for larger outfits, it’s usually much higher, said ECFA President Ken Behr.

What organizations get in return is the ECFA seal of approval that tells donors their accounting books are wide open and donated funds are wisely spent. “I think the main goal is to try to be transparent,” said Vickie Koth, vice president of Christian Freedom International in Front Royal, a 20-year member of ECFA that provides humanitarian aid and advocacy to persecuted Christians around the world. “We want to be good stewards.”

ECFA accreditation has been embraced by the Christian nonprofit community since the council’s inception in 1979. Since then, membership has grown from 150 founding organizations to its current roster of 1,200 parent groups and 800 subsidiaries.

The accreditation carries clout, with membership including some of the nation’s biggest Christian outreach and ministerial groups, such as The 700 Club, Campus Crusade for Christ, Salvation Army, and Focus on the Family.

“We’ve had lots of stories from donors who said they will only give to our members,” Behr said.

Koth has heard similar comments from those who give to CFI. The accreditation, she said, is especially helpful to young organizations trying to build their reputation and attract donors. 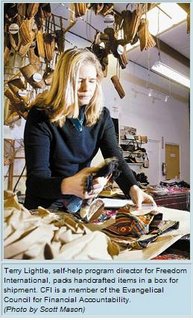 After Congress expressed concerns in the late 1970s about the lack of financial accountability for both religious and secular nonprofits, Mark Hatfield, a former senator from Oregon, encouraged action among Christian leaders that led to the ECFA’s founding. “A hundred and fifty Christian organizations came together and agreed to voluntarily submit to each other — to be accountable to one another,” Behr said.

In addition to the audited financial statement, ECFA developed six other standards for membership that include requirements for the size of the nonprofit’s board, how often it meets, and who can be a board member — for instance, relatives of board members are barred from serving.

Fundraising practices are also monitored. Behr said the ECFA discourages “aggressive” campaigns, such as exaggerated or deceptive statements made by an organization to attract donors. A big part of ECFA’s faith-based mission is to help members who may be in noncompliance with the standards, which could result in being dropped from the membership rolls.

“We try not to do that,” Behr said. “We see what we do as redemptive in nature.”

In the spirit of fiscal prudence, the ECFA gradually moved westward, first to Herndon — where rent at the time was somewhat cheaper than its previous location in Washington — then to Winchester in 1999, after the price for office space started soaring in Northern Virginia.

“We chose Winchester and bought into a business condo,” said Paul Nelson, former ECFA president who passed the baton to Behr this year. “We thought it was a wise investment.”

Before stepping in as ECFA’s president 12 years ago, Nelson served on the council’s board while he was working as executive vice president and chief operating officer for Focus on the Family, a Christian radio ministry based in Colorado.

“I saw an opportunity in ECFA that I though would be a challenge,” said Nelson, who lives in Winchester. “I saw the need for an increased profile for ECFA.”

Under Nelson’s leadership, membership nearly doubled. He also nurtured the development of field review teams, which meet with members on a random basis to double-check reported information and compliance with ECFA’s standards.

“Going out into the field was something that’s been a big undertaking, but that’s one of the hallmarks of the accreditation,” he said.

While field teams were already in place before Nelson came on board as president, he said they became more active as ECFA’s membership continued to grow. Now field teams visit 10 percent of ECFA’s member organizations each year.

“That once seemed like an insurmountable dream,” Nelson said, “but now it’s achievable.”

Nelson was also pleased when ECFA unexpectedly developed relationships with overseas organizations. It started when ECFA officials met with interested parties in China, who were intrigued that a U.S. organization could hold nonprofits financially accountable without government involvement.

Since then, ECFA has become involved with the International Committee on Fundraising Organizations, a board of representatives from various financial accountability groups in other countries that meet yearly to exchange ideas.

As ECFA’s new president, Behr wants to continue raising the organization’s profile within the Christian community.

“In order for our seal to mean something, we need to be larger,” he said.

One way the ECFA will try to do this is by creating a new category of accreditation for nonprofits that cannot afford the required financial audit.

While Behr says smaller organizations could really benefit from an ECFA accreditation, a different category for them would be created to keep the reputation of the original seal intact, since it represents ECFA’s highest standards.

“The value of the seal is that those who have it have done something to earn it,” he said.
Another major component of ECFA’s mission is its educational offerings.

“When we are on the road, more than half the people attending our classes are not members,” Behr said.

Reaching those nonmembers is intentional, he added: “This is a ministry for us.”

Travel and instructional expenses are covered by ECFA’s membership fees, which account for 90 percent of the organization’s income. The other 10 percent in ECFA’s $1.5 million annual budget comes from donations and grants.

Busby, a certified public accountant and author of a number of financial management books geared toward Christian nonprofits and church organizations, said ECFA’s educational offerings have tripled in recent years.

When it comes to financial accountability, ECFA doesn’t exclude itself from the fiscal scrutiny of others.

That’s why it has a 15-member board of directors and a 15-member committee charged with reviewing the membership standards. Half of the board and committee members are required to be representatives of nonmember organizations.

Behr said ECFA also makes its budget information readily accessible to the public, a “transparency” that the council tries to instill in its member organizations.