There was interesting reading in today's WSJ. Arthur C. Brooks, Professor of Public Administration and Director of the Nonprofit Studies Program at Syracuse University 's Maxwell School of Citizenship and Public Affairs and also the author of the book, "Who Really Cares: The Surprising Truth about Compassionate Conservatism" makes an interesting case about the future of religious conservatives in the United States.

While many political pundants bemoan the proliferation of religious comments by our politicians, especially surprisingly as of late from left-leaning Barack Obama (who claims a personal relationship with Jesus Christ) and Hillary Clinton (who describes herself as a "praying person"), Arthur Brooks has the statistics that show religious conservatism is likely to be even more pronounced in the United States in the near future.

Brooks states that in all likelihood, "religion will grow as a social force in American culture and politics over the coming decades." The reason? The religious conservatives have a quiver full.

His statistics are pretty amazing. While it could be argued that maybe the dividing line between conservative and liberal, religious and not-so, Republican and Democrat is 50/50, religious conservatives seem to have more children and their children are even more likely to vote like their parents than to worship like them.

According to Brooks, 100 religious adults, defined by their weekly attendance in a house of worship, will have on average 223 children. According to similar surveys, 100 people who attend church less than once per year or never would have just 158 resulting in a 41% fertility gap.

Religious people self described politically as "conservative" and "very conservative" were also found to have an amazing 78% more children than secular liberals.

While a quiver full may not ensure long-term political rule, it is certainly something to be concerned about if you are a social liberal, likely to be unmarried or estranged from both family and children and likely to be wondering why elections continue to be so close when it seems like everyone at the university and everyone in the media is of the same ilk.

So having babies, or having a quiver full, is not only a likely result of socially conservative thinking: traditional families are good, parents are the best instructors for our youth, family values are religious by nature; but also may result in superior political numbers.
- August 20, 2007 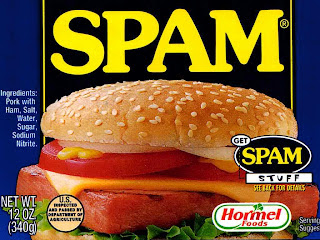 I received an inquiry today about a recent appeal made via email SPAM (wouldn't you hate to have been the marketing manager at Hormel Foods when your famous brand was being used for unwanted and irritating email!)

This email was regarding the urgent need for some persecuted Christians in a Muslim country. What was interesting is that while the need was likely true, the email requested that funds be sent to a P.O. Box, the return email was from a hotmail account and the phone number had about seventeen numbers in it with about seven dashes.

While this was an obvious scam, it is a good example of how a little bit of the gift of "discernment" goes a long way. Christians, by nature (not their human nature but by the spiritual), are compassionate and caring people and may be an easy mark for a giving scam.

There are a few very simple principles about giving and this appeal is actually a good example of some elements in any appeal to be wary of from the start:

A little discernment goes a long way with most of these email scams. With practice, you'll find the delete button on your email easy to hit with many fingers.

Donor 101: What every donor should know about giving to charities

1. Know your charity. Many supporters only want to receive minimal information to keep them apprised of ministry efforts and prayer needs. Others like to know the doors are open to participate in a more personal way, visiting outreach centers, volunteering in soup kitchens, or joining short-term mission teams. Identify your own level of desired relationship and participation with the ministries that interest you.

2. Understand what your gift will accomplish. If you are giving for the general purposes of a charity, the overall ministry outcomes are aided by your gift. Are you giving to a project? If so, is the project sufficiently defined so you understand the project goals?

3. Give to accountable charities. While all organizations likely believe in accountability, some make themselves truly accountable. For example, ECFA members demonstrate their accountability by submitting to a set of accountability standards. Use the ECFA member directory at www.ECFA.org to determine which charities have taken a stand for integrity by joining ECFA. ECFA members have financial statements audited, reviewed or compiled by an independent CPA, provide copies of these financial statements to anyone who request them, have an independent board, and avoid conflicts of interest.

4. Focus on the mission of the organization instead of overhead percentages. Some people assume that the best organizations to support are those with the highest program expenses and the lowest overhead. It’s an easy calculation, and often used as a quick formula to determine “efficiency.” ECFA cautions against making judgments about ministry efficiency solely upon the calculation of expense percentages. Because of variables between organizations and the many factors that affect the reporting of expenses, a true “apples-to-apples” comparison is not possible, plus these calculations do not measure effectiveness.

5. Remember your role. Often, donors use the same language as investors and in many ways it’s good to think of the gift as an investment in the kingdom. However, that is where the similarity ends. All too often, donors forget they are to be “storing up treasurers in heaven” and expect more of a reciprocal relationship with the charity. All gifts are important and those that can give larger gifts have more responsibility, not necessarily more perks, privileges or access. The reward given to a donor is to be eternal, not temporal.
- August 06, 2007