Why The Next Pope Matters 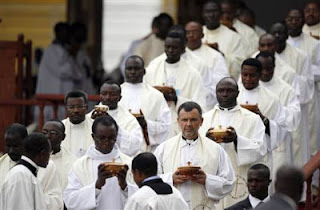 Pope Benedict XVI surprised many Catholics when he announced that he would be stepping down later this month.   The 85-year-old former Cardinal Ratzinger said he no longer has the mental or physical strength to lead the world's 1.2 billion Catholics.

Since that time speculation has run wild in the western press with the names of American, Canadian and European Archbishops and Cardinals suggested as some of the possible successor to what Roman Catholic’s claim is an unbroken line of succession going back to the Apostle Peter.

Insiders and others have commented on the type of Pope they would like.  Many are hoping for someone more acceptable to the less conservative wing of the church, particularly someone that would fit in with the prevailing theme of going ‘younger and more appealing’ to the various, divergent and liberal views of those in Europe and in North America.   Women as priests, acceptance of homosexuality and the relaxation on birth control are often mentioned as ‘hoped for’ developments by the media in Europe and in the US.

However, the Church (neither the Roman Catholic or the rest of Christianity) is no longer European or North American.   After years of a European centered and often Italian dominated Papacy, the time is ripe for leadership to arise from the global South.

In the past fifty years the center of Christianity has moved south…way south.   In the 1950’s emerging Christianity in Africa and in Asia started to clearly differentiate themselves from a European and a North America style of Christianity.   The Catholic Church in Latin America is largely charismatic and Pentecostal just as the fastest growing non-Roman Catholic segments of Christianity are as well.  In Africa, the growth of the Roman Catholic Church has required the church to find better ways to involve non-ordained clergy including family groupings, house churches and women in leadership positions.

According to Philip Jenkins, Christian historian and author of “The Next Christendom” statements about what Catholics believe today refers only to what that "ever-shrinking remnant of Western Christians and Catholics believe.  Such assertions are outrageous today, and as time goes by they will become even further removed from reality.  Europe is demonstrably not the faith. The era of Western Christianity has passed within our lifetimes."

Today the fastest growing Christian areas geographically are Africa and Latin America.  Asia likely has almost 400 million Christians and the Catholic Church, despite the scandals and criticisms of the West enjoys a solid share of the Christian population, often exceeding 50% in many of these emerging nations.

Likely the Catholic Church will embrace a respected leader from one of these emerging nations as the new Pope.  In doing so it will likely embrace the new reality of how the church is always adapting to new cultures, new worship styles and finds a way to be relevant in every part of the globe.  It will also be better prepared to address the issues that confront the church including celibacy and orthodoxy.  As Jesus said, “From Jerusalem, and in all Judea and Samaria, and to the ends of the earth." 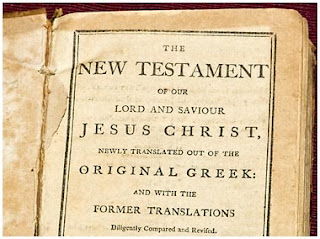 I have recently been looking at some of the claims by some uniformed skeptics and biased scholars that the New Testament cannon is result of a late (i.e. 4-5th century) compilation by the medieval church.   Their arguments are tiring but are widely published and as a result need to be refuted from time to time.

One of the best illustrations I can use to demonstrate that the New Testament writers were who they claim to be is a comparison to the attack on the World Trade Center on 9/11/2001.   Stay with me and I’ll tell you why this makes sense.

The writers of the New Testament claim to be primarily all eyewitnesses; eyewitnesses to the ministry of Jesus Christ and others as well to the early and powerful witness of the Holy Spirit in the early church.

One example is Luke. This is what the Apostle Luke has to say at the beginning of the Gospel that bears his name:

"In my former book, Theophilus, I wrote about all that Jesus began to do and to teach until the day he was taken up to heaven, after giving instructions through the Holy Spirit to the apostles he had chosen. After suffering, he showed himself to these men and gave many convincing proofs that he was alive. He appeared to them over a period of forty days and spoke about the kingdom of God."

Bible scholars (but not the skeptics) date the writings of Luke to be somewhere between 58 and 65 AD primarily because Luke doesn’t mention the death of neither the Apostle Paul (around 65 AD) nor the Apostle Peter (around 68 AD).

Just after the deaths of Paul and Peter, a Roman general named Titus, who would soon become the Roman Emperor, came with his army and sieged Jerusalem.   The siege of Jerusalem, beginning in April, A.D. 70 is a well-documented historical fact.  General Titus brought three legions against the Holy City.  In August of A.D. the same day when the King of Babylon burned the Temple in 586 B.C., the Temple in Jerusalem was burned again by Titus and his Roman soldiers.

Along with the Temple, all of Jerusalem was destroyed,  just as prophesied by Jesus and recorded by Luke (Luke 19:41-45)

In the New Testament the Temple is mentioned by name106 times; Jerusalem is referenced 141 times.

Now, back to the 9/11 illustration, imagine someone is writing about the United States and 106 times the World Trade Center is mentioned and New York City is mentioned 141 times.    What is the likelihood that the terrorist attack and the destruction of the World Trace Center would not be mentioned if the writing is AFTER 9/11/2001?     Since none of the four gospels, nor any of the 27 books of the New Testament that we refer to as the scripture mention the destruction of the temple nor Jerusalem in 70 AD the likelihood that they were written, edited or modified after 70 AD is very remote.

The writings and letters of these Apostles and other authors were widely circulated while other eyewitnesses were still alive.  Any falsehood or exaggeration regarding the miracles and the works of the Holy Spirit in the establishment of the early church would have been easily refuted.  Ultimately, the Church recognized the New Testament canon of 27 books based upon their apostolic authority, internal constancy, conformity to orthodoxy, and widespread acceptance.
- February 04, 2013