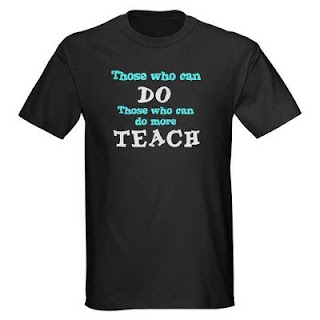 You have likely heard the saying, "Those who can't, teach".

I've never liked that saying. As an occasional teacher at various levels, church, corporate, profit, nonprofit and educational, including undergraduate and graduate, I thought it was not true regarding my colleagues and hopefully not true of me as well.

Over the years, I've become even more certain that the opposite is actually true. For those that consider themselves leaders, people that influence and provide encouragement, guidance and inspiration, it is imperative to understand that you need to be able to teach.

Personally, I've had mixed results. There have been times when I felt that even a relatively short amount of time that I've had to develop leaders actually left a lasting imprint. Things including people, processes and organizations were forever (at least for the foreseeable future) changed. I was able to look back at my short tenure and smile, knowing that I had not only led but taught and developed other leaders that were able to carry on.

Other times, I had no sooner moved on to a new assignment, a new town or a new organization and everything that I thought I had accomplished returned to the state it was before I ever engaged. It's sad but true and sometime disheartening but very few can claim a perfect record.

I've learned from those times however. I don't necessarily have to think of them as mistakes as much as they were lessons learned. When I have the opportunity I develop a stronger and more determined resolve to not only 'do' but 'teach' others so that they have the opportunity to learn from my experiences both good and bad. 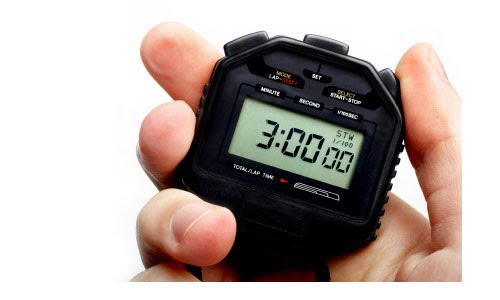 A little bit of intentionality goes a long way.

Most churches are very intentional. The worship set is typically planned out days if not weeks ahead of the service. The sermon is prepared, often practiced and reviewed. The message is so intentional that it is often a part of a sermon series that has been carefully planned and coordinated into a cohesive teaching season. Even the announcements have been planned to maximize important upcoming events. The bulletin, sermon notes and other weekend preparations are all very intentional.

And then comes the offering.

Typically, the offering is three minutes of random musings, some thoughtful prayer offered at the end of the announcements and the ushers come forward.

The offering can actually be a very powerful and rewarding time for all when it is carefully planned and intentionally delivered. With the right amount in intentionality the time for the offering can become, "Three minutes of Stewardship."

It’s often mentioned that Jesus spoke more about money and giving than heaven and hell combined. This is true; for example, 11 of his 39 parables talk about money in some manner.

Throughout the New Testament, there are a number of principles that are related to stewardship. Just to name a few there is the principle of “storing up your treasure in heaven” (Matthew 6:20), “being trustworthy with worldly wealth” (Luke 16:11), “more blessed to give than receive” (Acts 20:35).

Taking the three minutes spent setting up the offering and intentionally teaching one of these reoccurring stewardship principles can transform a local church. Instead of treating the offering as the transition between the announcements and the sermon, three-minutes-of-stewardship introduces one of the most important components of personal worship, teaches biblical principles that cut to the heart of who is Lord of all, and trains new disciples how to not trust in uncertain riches but to trust in the Living God (1 Timothy 6:17).

Over a short period of time, the three-minutes-of-stewardship becomes a powerful weekly reminder that giving is not about meeting the financial needs of the church but a simple and consistent method to keep our hearts aligned with God.

Teaching stewardship for three minutes doesn’t seem like a long time and it isn’t. It is however, plenty of time to introduce one important Biblical principle. Over a number of weeks, the most applicable verses on stewardship can be shared.

In just three months, the three minutes add up to more than an entire 30-minute sermon on how we become true disciples when we understand the manner in which God wants us to honor him with our entire life, including our uncertain riches.

I was recently talking with a good friend who served as a pastor for a number of years and is now working with various Christian organizations and churches on planned giving, estate planning and capital campaigns.

One of the facts that he shared with me is something that is hard to fully understand. Many estate planning experts point to a study by Boston College that estimated that more than $40 trillion will be transferred from one generation to the next generation in the coming years.

Considering that charities including churches in the United States receive just over $300 billion annually from all sources, being able to participate in some of the planned-giving piece of that transfer would be a game changer.

There are a number of organizations, both for-profit as well as not-for-profit, who provide estate planning seminars and advice. In the church however we have one great advantage and that is that we can offer those that have the opportunity to give or participate in planned-giving a Kingdom perspective.

The early church certainly had a Kingdom perspective. In the Book of Acts, we see the beginnings of the church. After Pentecost, the gospel of the Kingdom was spoken by the Apostles with much boldness. Then in Chapter 4:32-37 of Acts we read about Barnabas, originally called Joseph:
"Now the large group of those who believed were of one heart and mind, and no one said that any of his possessions was his own, but instead they held everything in common. And the apostles were giving testimony with great power to the resurrection of the Lord Jesus, and great grace was on all of them. For there was not a needy person among them, because all those who owned lands or houses sold them, brought the proceeds of the things that were sold, and laid them at the apostles' feet. This was then distributed for each person's basic needs.
Joseph, a Levite and a Cypriot by birth, the one the apostles called Barnabas, which is translated Son of Encouragement, sold a field he owned, brought the money, and laid it at the apostles' feet.

This is the first time we hear of Barnabas, he went on to be one of the great leaders of the early church. Barnabas was a partner on many of Paul’s missionary journeys and is called an Apostle later in the same book of Acts.

Barnabas sold a field he owned and gave the money to the Apostles. He took a non-liquid asset, a piece of real-estate that may not have been producing income, and turned it into a tangible gift for the ministry.

Gifts to ministry may or may have a tax benefit but they always provide a benefit to the Kingdom. In addition, we can clearly say that gifts given to the church, given to the various para-church nonprofit organizations are all given “unto the Lord”.

Just one example of the Kingdom connection in giving is in the story of the Widows mite; the story of the women that gave two small copper coins. If you recall the widow’s mite, Jesus commended the widow for giving “all that she had”, which Jesus said was more than anyone else had given, though their gifts were more substantial. Jesus commended the woman while at the same time, and as recorded in just the previous chapter of Mark, He severely criticized the temple moneychangers telling them they had turned the Temple into a “den of robbers”.