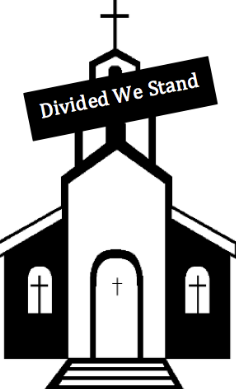 When we look back at the beginning of the Church at Pentecost, we see a Church that is empowered by the Holy Spirit and motivated by their personal witness of the death, burial and then the glorious resurrection of Jesus Christ.

However, it was only a short time before divisions crept into the Church.  Some of the Epistles, which are letters to the early Churches, were written to address these conflicts.

Jesus prayed that we would not be divided but that we would be as one, "So that the world may believe".  In the Gospel of John, just after sharing His last supper with his disciples Jesus turned his eyes towards heaven and prayed,

“I pray that they will all be one, just as you and I are one—as you are in me, Father, and I am in you. And may they be in us so that the world will believe you sent me. I have given them the glory you gave me, so they may be one as we are one.  I am in them and you are in me. May they experience such perfect unity that the world will know that you sent me and that you love them as much as you love me. (John 17:21-23)

“United we stand, divided we fall” is a saying that has been part of the American culture since the time of the American Revolution.   During our Civil War, it became a rallying cry for the Union troops.  During times of crisis such as during the second world war and after 9/11, unity was not simply a rallying cry but could be felt and experienced as American’s came together for a greater purpose than their ideological and sometimes petty differences.  Unity was thought to be of greater importance than political aspirations, regional interest or local issues.

It should also be true in the Church. The Apostle Paul understood this well.  He wrote to the Philippians, “Make my joy complete by being of the same mind, maintaining the same love, united in spirit, intent on one purpose," (Phil. 2:2). He wrote also to the Corinthians, “I appeal to you, brothers, in the name of our Lord Jesus Christ, that all of you agree with one another so that there may be no divisions among you and that you may be perfectly united in mind and thought. (1 Cor 1:10)”

Unfortunately today, there are many that believe the opposite.  It's almost like they are shouting, "Divided We Stand!"  Sects, divisions and denominations have been part of the Church for a long time.  In the United States however, because of our 1st Amendment rights and our respect for the diversity of our faiths, denominationalism has had a field day.

Historically the Church had defined unity through what is referred to as orthodoxy.  The word Orthodoxy is derived from two Greek words, “orthos” meaning “right” or “straight”; and ‘doxa’ meaning a “belief” or “opinion”.  So in other words, the early Church defined unity as being aligned or unity with those of the right belief.

In 325 AD, the Church met together at the Council of Nicaea.  It was this council that produced the “Nicene Creed” that determined orthodoxy or unity in the Church for over 700 years until the Roman (or Latin, western) Church split from the Orthodox (or Greek, eastern) Church in 1054 AD.

While the Nicene Creed may have defined orthodoxy for the ecclesiastical church, it didn’t define how a person becomes a Christian.  The Bible is clear that becoming a Christian is not about joining a church or believing all the right stuff or conforming to the doctrinal views of a denomination but repenting from sin and believing in Jesus Christ.

Paul gives us the methodology in Roman’s 10:9 which, along with a number of other teachings in the Bible, gives us our understanding of salvation.  In our Churches we often urge people to come forward, ‘accept’ Christ and be converted by believing in Jesus’ resurrection with their heart and confessing with their mouth that Jesus is Lord. It is however, not these actions that ‘saves’ anyone. The Apostle Paul in Ephesians 2:8 was clear that salvation is by grace through faith.  It is a gift from God and not a result of a formula however the formula or method is very helpful in people taking that first step of faith and repentance.

Unfortunately all too often the leaders of the Church define unity not on primary orthodoxy or a belief in the Biblical Jesus but through conformity to doctrinal and denominational statements regarding not only beliefs or doctrine but also behavior and performance. While true Christians serve the one and only God and know Jesus in a personal and intimate way and have been redeemed by God, some self-appointed watchdogs of heresy and various denominations define unity in the church as adherence and conformity to what many would consider to be non-essentials.

As a result, the Christian Church is divided and weak.  Instead of focusing our energy and mission on advancing the Kingdom of God and fulfilling the great commission to go and make disciples, we fight each other.

America, the once popular and vibrant home of Biblical principles, evangelical missions and the sponsor of compassion worldwide has become weak, fragmented and antagonistic towards the gospel of Jesus Christ.  Christians are looked at as petty, narrow minded and judgmental and it’s no wonder.  Often the way we treat each other can be summed up in those same words.   We can be petty; we find minor doctrinal differences and split out churches based on 16th century arguments.  We can be narrow-minded; we find on Sundays our churches continue to be segregated between black and white and many churches don’t allow women to assume leadership or be given appropriate titles while at the same time knowing that women leaders have served for centuries in all capacities of the Church. We can be judgmental; Jesus said we were not to judge in a manner that is self-righteous, hypercritical, and destructive.

Our spiritual journey and cultural differences will adjust, change and appear to be more or less obvious but our spiritual destination is and will always remain the same.

The Meaning of “Advent”

Advent started this year very neatly on December 1st.  By definition, Advent is an arrival or an appearance.  The theme of Advent in the Church has historically been readings and teachings that help prepare us for the Second Coming while commemorating the First Coming of Christ at Christmas.

Advent was not a season of buying or festive songs and decorations but a season of preparation through prayer, study and fasting

It is interesting for us to look back at the scriptures that foretold the coming of the Messiah.  In particular, I’ve always liked:

Gen 49:10
The scepter will not depart from Judah
or the staff from between his feet
until He whose right it is comes
and the obedience of the peoples belongs to Him.

The wise men were told it was Bethlehem that was where they should go:

"But as for you, Bethlehem Ephrathah, too little to be among the clans of Judah, from you One will go forth for Me to be ruler in Israel. His goings forth are from long ago, from the days of eternity." (Micah 5:2)

For a child will be born for us,
a son will be given to us,
and the government will be on His shoulders.
He will be named
Wonderful Counselor, Mighty God,
Eternal Father, Prince of Peace.

What is interesting about these prophecies is that they often immediately include the second coming as the very next verse in Isaiah 9 (verse 7) reads:

The dominion will be vast,
and its prosperity will never end.
He will reign on the throne of David
and over his kingdom,
to establish and sustain it
with justice and righteousness from now on and forever.
The zeal of the Lord of Hosts will accomplish this.

This is why the Jews were all so excited that Jesus may be the Messiah. If you remember, they were all looking for a Messiah.  The holy man, Simeon, was promised that he would see the Messiah before he died and the prophetess Anna rejoiced and prophesied over the Christ Child (Luke 2:36-38)

We should take this season of Advent seriously as the early Church did beginning in the 4th Century.  They were well aware that only half of the scriptures regarding the Messiah were fulfilled.  The others are associated with His second coming.  This is exactly why the Jews were so excited when they saw Jesus coming into Jerusalem on a colt, the fold of a donkey. They knew that the Prophet Zachariah had prophesied the Messiah would come into Jerusalem this way.  They shouted Hosanna likely not because he was on a donkey (verse 9) but because of the very next verse (Zachariah 9:10)

I will take away the chariots from Ephraim
and the warhorses from Jerusalem,
and the battle bow will be broken.
He will proclaim peace to the nations.
His rule will extend from sea to sea
and from the River to the ends of the earth.

Jesus will return. That return is known as the Second Coming.  The disciplines of fasting, prayer and study will prepare us for His coming.