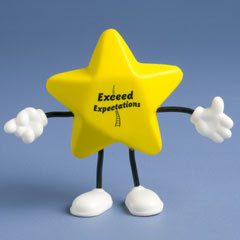 Don’t you just love getting a performance review? Perhaps not....if most people were honest, they would tell you that sitting down with your supervisor or leader and receiving a written review with scores and evaluation metrics can be a little unnerving.
Back when I was working at Ford, they changed the performance review process and the ‘best’ grade that a person could get for a while was ‘exceeds expectations’. At that time, only a few people received that grade. The majority received a review that said they ‘fully met expectations’ and of course their were a few that ‘needed improvement’.
Did you know that as Christians, true Christ-followers, we also will receive a performance review? The Bible teaches us that all of us will die and that after death comes a judgment (Hebrews 9:27) In addition, the Apostle Paul said, "For we must all appear before the judgment seat of Christ, that each one may receive what is due him for the things done while in the body, whether good or bad." (2 Cor 5:10)
We may not think too much about the idea of being judged or given a grade but I believe that Jesus talked about it when he gave us the parable of the talents. One person was given five, one was given two and one only one. After the master returned, those that were given five and two had earned five and two more respectively.

These two faithful people were given their performance review. The master told them they had done well and He put them in charge of many things.
The one that was unfaithful dug a hole in the ground and hid the money and returned what he had been given. His performance review didn’t go too well. No silver star, no ‘atta-boy' for this person, it was back to hard labor.
While it may be difficult to think of us being judged we should all understand that we are accountable. One of my favorite verses is Luke 12:48 where it says, “Much will be required of everyone who has been given much. And even more will be expected of the one who has been entrusted with more.”
We have all been given very much. We live in one of the most prosperous countries of the world and have been given many talents....gifts from God that are to be used for His glory.
Don't dig a hole and hide what God has in you. Exceed your expectations and the expectations of those around you and you'll not be nervous when you get your performance review.
- March 27, 2012

Email ThisBlogThis!Share to TwitterShare to FacebookShare to Pinterest
Labels: Organization 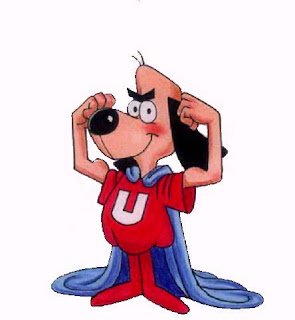 Sometimes it good to be the underdog.
As I write this there are three NCAA basketball games on TV and in just the past few days there have been no less than eight major upsets including schools like Missouri, Michigan, Duke, Temple falling to the underdog.
God likes underdogs. I can say that with full confidence but I'm not referring to basketball or sports of any kind. God likes underdogs because when we are weak and unlikely to overcome, He comes alongside us and fights our battles for us.
The Apostle Paul said in relation to God's sufficiency and his ability, "When I am weak, then I am strong".
Not a contradiction as Paul was merely calling upon the combined history of the people of Israel and this new and quickly growing Christian Church that was born on Pentecost.
While all humans are frail and our weaknesses abound particularly if we live long enough to acknowledge them, God typically enjoys using the underdog or placing us in a position where the task is too great for man but not for God.
In the book of Judges God prepares a man named Gideon for a battle against overwhelming odds. Gideon rallys 32,000 soldiers from the tribe of Ephram, still likely inadequate but God surprises him with these words, "You have too large an army with you. I can't turn Midian over to them like this—they'll take all the credit, saying, 'I did it all myself,' and forget about me. Make a public announcement: 'Anyone afraid, anyone who has any qualms at all, may leave Mount Gilead now and go home.' Twenty-two companies headed for home. Ten companies were left." (Judges 7:2-3)

The story in the Book of Judges continues, twice more God thinned the ranks of soldiers until there were only 300. From 32,000 to 300, God made sure that Gideon and his army were underdogs.

God gave Gideon a great victory over the Midianites. After dividing his company into three and using stone jars, candles and a shout, the victory came to the underdog. God got the glory.

What are you facing in this life that you feel like an underdog? Your business, finances, family, health and day-to-day trials can sometimes feel overwhelming but God loves the underdog. In First Samuel 16:7 God says that man looks on the outward appearance but God looks at the heart.

Guard your heart. Keep it fixed not on the things of the earth or the ways of man but of heaven and the instructions given to us by God. See what God can do with the underdog. 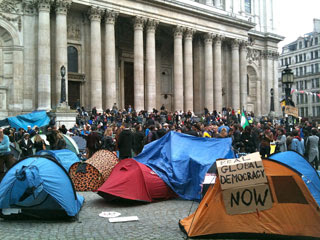 I've been watching the news reports of the "occupy" movement and one of the things that amazes me is the seemingly lack of interest in the objectives of the movement. It seems like many people have decided that they are likely part of the 99% and can feel a sense of solidarity in the movement but most of us (likely including most of the participants) are unsure exactly what this movement is about.

I don't pretend to know the aims or objectives of any individual or group but I've been curious as well about the growth of what many people are calling 'social justice'. I'm a stickler for the meaning of words and have found myself challenged by what people mean by social justice particularly in what are traditionally conservative church circles.

For example, many of us are pleased with the church's involvement in feeding the poor, reaching out to the homeless, providing educational opportunities, etc. Some churches have taken an even more active role in things like educational and mentoring programs for young people and adults. Here in South Florida, our church is involved in stopping human trafficking, foster parenting and adoption, all of which are considered to be the practical manifestation of God's kingdom on earth. Many that are involved in these programs embrace the term 'social justice' as an all-encompassing category of doing good works.

The 99% and "occupy" movements are also sited as examples of people that are involved in social justice. Regardless of what some of the people that are involved in these movements consider their objective there are many that are looking for completely new economic and political systems, an end to Capitalism and freely embrace the statement, "From each according to his ability, to each according to his needs". That quote was popularized by Karl Marx in 1875 and was the fuel for the communist revolutions of the early 20th. Century.

Here is another quote you may want to consider, "He has showed you, O man, what is good. And what does the Lord require of you? To act justly and to love mercy and to walk humbly with your God." (Micah 6:8)
- March 09, 2012