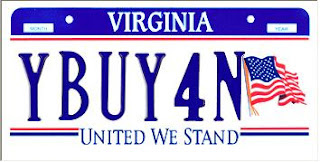 I just love my new state of Virginia. Here in Virginia, because they are relatively inexpensive, there are a lot of "vanity" plates and I saw one on a Cadillac in my neighborhood that said, "Y BUY 4N". That makes me smile as I spent over twenty years working for an American automaker.

Recently, Ford and GM have been in the papers a lot. Motor Trend magazine editor said that for his entire adult life the American automobile makers have been trying to go out of business and he believes that they have the determination and stamina to make good on that quest.
Most people are unlikely to fully appreciate the complexity of the automotive industry but are usually pretty opinionated on exactly what a company like Ford or GM needs to do to get better. Likely, it's because most of us believe we have invested a small fortune in our vehicles from small little sport cars to fancy SUV's, and it give us at least an informed opinion on what it would take to be a good automobile company.
Roger Simmermaker is the editor of a website that shares the same sentiments as my neighbor who drives the Caddy with the vanity plate. Roger's website is http://www.howtobuyamerican.com/ and is full of information for those people that want to buy American. While I fully appreciate his sentiment, I'm not a fanatic as I'm neither a globalist nor a protectionist. However, I do like to be fully informed of product quality, value and opportunity and often feel I'm a little misinformed.
Roger wrote an article on Ford and GM that attempts to clear up some of the misperceptions that people have regarding the two remaining US automobile makers and I've given the link at the top of this blog for those that are interested in the article. It's a pretty good read.
Roger comments that while Ford and GM have been beating Toyota in quality in study after study, few Americans would be aware of the fact. Nevertheless, JD power & Associates rated both the Ford Fusion and Mercury Milan higher than both the Camry and the Honda Accord this past year.
One of the other misperceptions is the greater investment that both Ford and GM have been making in existing US factories, usually with little or no tax breaks. Typically we hear of new Japanese and German investment in America and American companies creating US layoffs. Too bad because it just adds to the confusion and misperception of the investment that the US automakers continue to make in this economy.
The article states that American automotive employees involved in R&D are also much more likely to be working for either Ford or GM. Japanese companies, reports Roger, employ 3,600 American workers in R&D vs. 65,000 similarly skilled employees at Ford and GM.
His closing remarks regarding quality were the best. The recent 2006 J.D. Power 2006 dependability study identified the top five quality brands which were (in order): Lexus, Mercury, Buick, Cadillac and then Toyota. Lincoln and Ford brands were also in the top half of the quality mix, above many foreign brands that have the reputation for quality that may be not totally deserved.
Ford and GM have some work to do on their financial picture and if they follow the same path that got them to some relative success in their strive for quality, they'll make it.
- December 20, 2006

Part of the prayerful hope in the founding of ECFA was to help good Evangelical charities become great Evangelical charities. Now in its 27th year, the ECFA is comprised of over 1,200 accredited evangelical Christian organizations. The mission statement emphasizes the development and maintenance of standards of accountability and ethical practices.

Recently, a few self-described charity watchdog groups have been gaining popularity, particularly in the press, primarily because of their willingness to rate charities typically based on financial calculations and publish (as well as release to the media) the results. Many also rate the charities on a letter scale (i.e., A to F) or via two, three or four stars, like movies and hotels.
ECFA is not a watchdog group but an accreditation agency and many people likely are unaware of the difference. The ECFA model is an accreditation model which provides a seal of approval to the organization that has met the requirements of accreditation, primarily compliance with the Seven Standards of Responsible Stewardship. These standards include an evangelical statement of faith, an independent board of directors, audited financial statements, conforming use of resources, transparency in their finances, avoidance of conflicts of interest and truthfulness in fundraising.
Compliance with the Standards is monitored by ECFA in three ways. First, all ECFA members must annually submit membership review information including audited financial statements, IRS Form 990 (if applicable), salary information, fund-raising appeals, board composition, changes in organizing documents, and much more to verify compliance with the Standards. Second, ECFA conducts on-site field reviews at over 12% of its membership each year. These field reviews verify the information submitted in the annual membership review, confirm compliance with the ECFA Standards, and give support to the member organizations. Third, ECFA responds to complaints against member organizations. All such complaints are investigated thoroughly in order to determine possible noncompliance with the Standards.
Typically charity watchdog groups rate charities based primarily, if not solely, on a mathematical analysis of functional expenses and balance sheet data. The ability to retrieve financial information submitted to the government by charities via the web has provided the data access for the charity watchdog groups to evaluate charities based on the financial information provided to the government annually on Form 990.
The methodology embraced by the watchdog groups as well as their commentary related to their analyses equates the efficiency of the charity (i.e.. how much of their expenses goes to fundraising and general and administrative costs) with the effectiveness of the organization. In their words, because an organization has a low overhead, they are therefore an organization that is worthy of your consideration.
While these watchdog groups may be well-meaning, they are somewhat misguided. Most people that are intimately involved in charitable, philanthropic causes know that a rush to judgment of the integrity and effectiveness of a charity based on simple financial calculations is inappropriate.
Because there are many different charity watchdogs, the same charity may receive a “plus” for certain financial results from one watchdog group while another watchdog would give the same charity a “minus” for the same financial results. Some watchdog groups, for example, approve and give higher scores to charities that have cash reserves (e.g., higher is better) with the idea that the cash reserves provide stability. Other watchdog groups give the lowest scores to charities that have high cash reserves (e.g., lower is better).
While none of the watchdog groups state that charity evaluation is a simple exercise, it can be troubling to charity leaders as well as donors to think that someone or some group is equating charity efficiency (very little spent on fund-raising and administration) with charity effectiveness. If this “efficiency equals effectiveness” premise were true, FEMA’s decision to use $2,000 debit cards to victims of Hurricane Katrina would have been applauded by the general public and national media, while in reality it was scoffed at as another example of a government fiasco and incompetence.
Perhaps this connection between efficiency and effectiveness in rating charities is best articulated by Jim Collins, author of “Good to Great” and recently the monograph to accompany his book entitled, “Good to Great and the Social Sector”. In the very beginning of the book, Jim Collins discusses this confusion between financial inputs and charitable outcomes or outputs:

“I recently opened the pages of a business magazine that rated charities based in part on the percentage of budget spent on management, overhead and fundraising. It’s a well-intentioned idea, but reflects profound confusion between inputs and outputs”. Think about it this way: if you rank collegiate athletic departments based on coaching salaries, you’d find that Stanford University has a higher coaching cost structure as a percentage of total expenses than some other Division I schools. Should we therefore rank Stanford as “less great”? Following the logic of the business magazine, that’s what we might conclude-and our conclusion would be absurd. Stanford won the National Association of Collegiate Directors of Athletics Cup for best overall performance for 10 consecutive years, beating out all other major schools, while delivering athlete graduation rates above 80%.”

Jim Collins book is a great read for everyone involved in chartable work. It is highly recommended to further understand the complexity involved in becoming not just a good charity but a great one. Another interesting read would be “Why ECFA does not rate charities” also found on the ECFA website at www.ecfa.org.