When We All Get To Heaven 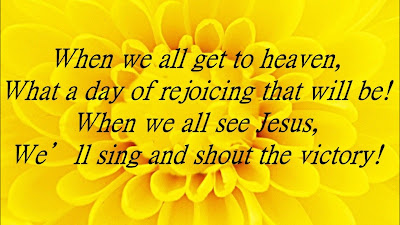 I've been teaching each Sunday on some of the traditional hymns of the Church and recently had the opportunity to talk about "When We All Get to Heaven,” a Christian hymn written by Eliza Hewitt and met Emily D. Wilson in 1898. Hewitt praises the wondrous love of Jesus:

If we are going to talk about ‘getting to heaven’ two sections of scripture immediately come to mind.  The first is 1 Thessalonians 4:16 & 17

“For the Lord himself will descend from heaven with a cry of command, with the voice of an archangel, and with the sound of the trumpet of God. And the dead in Christ will rise first. 17 Then we who are alive, who are left, will be caught up together with them in the clouds to meet the Lord in the air, and so we will always be with the Lord."

"Behold, I tell you a mystery; we will not all sleep, but we will all be changed, on a moment, in the twinkling of an eye, at the last trumpet; for the trumpet will sound, and the dead will be raised imperishable, and we will be changed."

So how do we learn from these verses?

First – notice that in these two verses, the word that is used for those that died by the Apostle Paul is sleep.  The prophet Daniel affirmed that those who “sleep in the dust of the earth shall awake” (Dan. 12:2). This obviously is a reference to the physical body.

Jesus once said to his disciples: “Our friend Lazarus has fallen asleep but I go that I may awake him out of sleep” (Jn. 11:11).

I prefer thinking of the dead as being asleep.   When you sleep you are peaceful.   The anxiety of the day, the stress of life, all of our aches and pains, they disappear in the bliss of a good nights rest.  Yes, sleep is good.
The early church used the same term; they thought of death in the same way.  They even called their burial grounds koimeteria, or “sleeping places,” and from this term derives our modern word, “cemetery,” a place to which the bodies of our loved ones are kept until they awaken.

The term sleep refers to the body….the body is said to be asleep.  It does not say the same about the soul.  We are both SOUL and BODY.

HOWEVER,  At the same time, we have very little in the BIBLE about what heaven is LIKE PRIOR to this event, that we are reading about in 1 Thes 4:16

Second, in these verses, Does Paul really describe what many call the "rapture"? That word “RAPTURE” has many fans and just as many detractors.  Many look forward to what is called the rapture but may not know where it comes from. Others, may argue that the word "rapture" is nowhere to be found in Scripture.

Well, let me settle that argument once and for all, the word ‘rapture’ is certainly in the Bible, you just have to use the Latin Vulgate version which was the primary Bible translation utilized for one thousand years preceding the Reformation. In our English version we read that we are to be “caught up” which is the English translation of the Greek word harpazo which was translated "rapturo" in the Latin Vulgate that derives the English words "Rapture" or "raptured". Setting aside the argument that the word rapture is not found in modern translations, the more important question is what does the original Greek word harpazo actually mean?

Well, in Greek, harpazo means to snatch up or take suddenly and vehemently, often with violence and speed or quickly and without warning.

So, this teaching of a ‘rapture’ is part of the broader teaching of the second coming of the Lord or what’s know as the Day of the Lord or the END TIMES.
There are many Bible scholars, pastors and teachers and I am included who believe that the second coming of Jesus Christ will be in two phases. First, Jesus will come for believers, both living and dead, in the “rapture”.  We see that these verses in 1 Thes 4 and 1 Cor 15 that show the transformation and catching up of all Christians, dead or alive, to meet Christ in the air—it will be sudden, and in secret, no one knows the day or the hour and it will be unknown to the world of unbelievers at the time.

I believe that it is amazing event, this removal of a countless millions of people that will usher that which is known as the seven years of tribulation and that at the end of this seven years, Christ will return to the earth with His church, the saints who were raptured along with those that are known as the “Tribulation Saints” (all of them martyrs).   There are many verses that substantiate this second coming including Matthew 24:30, 2 Thessalonians 1:7, 1 Peter 1:13, Revelation 1:7, Revelation 19:11-14).

Christ will be victorious over His enemies and will reign on the earth for 1,000 years (Revelation 20:3) with His saints, the church.

THEN After 1,000 years, living unbelievers and the wicked dead now raised to life will be judged at the great white throne judgment. They will then be cast into the lake of fire, while the saved will live forever with Christ in a new heaven and earth (Revelation, chapters 20-22).

The primary teaching of these verses in 1 Thessalonians 4 and also 1 Corinthians 15 is that 1) this event is sure, it will happen just as all other prophecies regarding the first and second coming of Jesus has and will happen 2) it is for God’s people, for those that know Jesus, for the SHEEP of his pasture,  we want to make sure that we are included in that group of true believers and 3) HEAVEN (or what we know of the ultimate heaven) is exclusively a gathering of ALL BELIEVERS of ALL AGES and ONLY BELIEVERS and the Bible teaches that this resurrection is a transformation of the same bodies we had on earth.

This teaching by Paul ends with this encouragement.  18 Therefore comfort one another with these words.

The hymn, “When We All Get to Heaven,” by Eliza Hewitt and Emily D. Wilson is one great encouragement as well: