Yes, It's A Wonderful Life 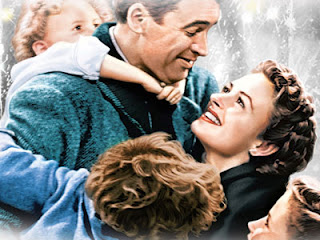 I enjoy the seasons.  While the official seasons of Summer, Fall, Winter and Spring don’t change much in Florida, the holidays are still special.   For Christmas, my wife and I enjoy getting into the mood by listening to Christmas carols on the radio or our old CD’s and of course watching the Hallmark Channels endless movie offerings, all with the same theme, often the same actors and just the right amount of snow.

There are standards however and every Christmas movie’s standard is Frank Capra’s, “Its a Wonderful Life.”  Released 70 years ago, with Jimmy Stewart as George Bailey and Donna Reed as Mary Hatch Bailey, the reason for its success is the heart-felt lessons that it teaches all of us through the intervention of Clarence the Angel.

If we look past the dramatic over-acting that was common for its day and the non-biblical view of angels (angels are created beings, not dead people earning wings), there are two spiritual truths to be understood

1. God’s greatest gift to you is your very life in its entirety

George Bailey was constantly searching for something different, something better.   As a young man, we see him planning on traveling the world.  Trains and steamships take you places where it must be better than Beford Falls.    He’s ready to leave again when his brother, Harry gets married and ruins his plans of escape.

George and Mary get married and have children but George is still a busy guy.  Too busy to be thankful for the life he has as he constantly laments the life he hasn’t been given.    George obviously envies his good friend Sam Wainwright who had introduced George to his future wife, Mary.

Old man Potter tells George that he’s worth more dead than alive and George decides to believe Potter who lies, cheats, defrauds and oppresses the townspeople.  It’s interesting how people are more likely to believe a lie even when it’s from a source that is despicable.

God’s greatest gift is George’s life itself with all of its ups and downs, the heartache, difficulties as well as its moments of ecstasy.    To make sure we don’t miss this lesson in the movie, Clarence’s angel boss, “Franklin” states clearly, “At exactly 10:45 p.m. tonight, Earth time, that man will be thinking seriously of throwing away God's greatest gift.”

God’s greatest gift is life itself!

A few years ago I was interviewing a candidate and on the top of his resume his objective was ‘to become a success’.

We often measure success all wrong and it can really mess up our lives.  Ambition is good but when it drives us to value things and devalue people we have our priorities all wrong.   George is ambitious and industrious but it creates unhappiness and dissatisfaction.   Beyond some prayers by Mary and the children towards the end of the movie, we don’t see any obvious reference to Christian values.

Honoring God, serving mankind, personal integrity, fidelity in marriage, hospitality to family and neighbors, parental responsibilities and citizenship are all present at various times in the movie but never noticeably appreciated by George.

Clarence is supposedly an angel and makes an attempt to clear up any misunderstanding of what success is about.  In the dedication of the book that was given to George he writes,  "Dear George, remember no man is a failure who has friends. Thanks for the wings. Love, Clarence."

"Having Friends," yes, that is definitely a priority.  More to the point, the Westminster catechism clarifies our priorities succinctly: Question 1. “What is the chief end of man?” Answer: “Man’s chief end is to glorify God, and to enjoy him forever. 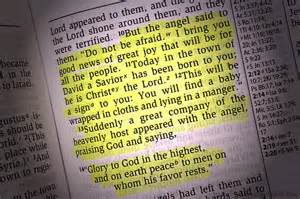 “But the angel said to them, "Do not be afraid. I bring you good news that will cause great joy for all the people.” (Luke 2:10 ESV)

Two thousand years ago, over the pastures and hills of Bethlehem, shepherds were watching their flocks.   Suddenly, the shepherds were startled by an amazing thing.  Angels, possibly surrounded by light and possibly even hovering in the air appeared.   Their reaction was that they "were sore afraid."  Today, we would use other words but all of us can relate to what it means to be terror-stricken.

“Fear not” is a common phrase in the bible, often attributed to angels.   In proper context, it can be found over 80 times.  God appeared to Abraham and told him to “Fear not.”   Moses told the people of Israel to “Fear not.”   Joshua was told by God to “Fear not,” and was given a further promise that He, God would be with Joshua as He had been with Moses.

The shepherds are given the best greeting of all as the angel said unto them, "Fear Not... behold a Savior" (Luke 2:10-11). The answer to their fear and the reason that this good news was to be for all the people was that the Savior, the long-awaited Messiah, was born.

This verse out of Luke kicks off this season of Advent and the beginning of the Christmas season.   While Christmas is associated with gifts and good cheer and great times around a dinner table with family, the message of the angels is still the message for today, “fear not, the Messiah is born”.

This baby that was born in Bethlehem was no ordinary baby nor ordinary king.  The Bible says clearly that Jesus was sinless, born of the Holy Spirit.  It was because of this miraculous birth that we can have life eternal.   This was the promise of the Messiah, the good news for all people.

What the Bible has to say about time

Here are a few selections: Ecclesiastes 3:1-8   For everything there is a season, and a time for every matter under heaven: a time t...