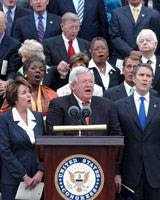 For those of you that from time to time visit this Blog, (mostly family and friends) you'll notice that I haven't been posting as much as I've been posting mainly on my organizations website (www.ecfa.org).

Here is an interesting article that was published by The Council on Foreign Relations. A think-tank headquartered here in Washington DC.

Evangelical Christians are believed to represent the single largest religious group in the United States, and as their numbers have grown, there are signs of increasing activism in U.S. foreign policy. Opinion surveys show evangelicals overwhelmingly supported President George W. Bush's reelection, are among the country's staunchest defenders of Israel, and remain supporters of the U.S. military campaign in Iraq. But experts say it is wrong to think of evangelicals as a monolithic force in lockstep with the Bush administration. A major evangelical group recently issued an appeal for more activism to prevent global warming and fight poverty, and evangelicals have pressed the administration and Congress to adopt a range of humanitarian and human rights initiatives.

What are evangelical Christians?

Evangelicals generally say they accept Jesus Christ as "Lord and savior," they have a personal relationship with Jesus, and they are committed to spreading his message so others can achieve salvation. Many evangelicals share in the belief derived from the Bible known as premillennialism, which holds that Christ's return will come ahead of a thousand-year reign of peace. Derived from the Greek word meaning "good news," the term "evangelical" took on broad significance when it was adopted by followers of Martin Luther after the Protestant Reformation. Evangelical Protestantism was the dominant form of Christianity in the early years of the United States and remained a strong part of American culture into the twentieth century. Many U.S. evangelicals today follow in the tradition of Billy Graham and Carl Henry, leaders who gained prominence in the mid-twentieth century by promoting activism in spreading the faith, as well as engagement with other religions to improve human welfare.

Are they different from fundamentalist Christians?

Experts say a common misperception is to equate evangelicals with fundamentalist Christians. Timothy Samuel Shah, senior fellow at the Pew Forum on Religion and Public Life, says both groups share a number of common beliefs, but an important difference is the activism of evangelicals. "Both evangelicals and fundamentalists tend to believe that [biblical] scripture is inerrant, that it is without error, and both tend to read scripture fairly literally and view it as absolutely authoritative from beginning to end," Shah says. "The difference, though, is that fundamentalists tend to be separatists [withdrawing from politics and culture] while evangelicals tend to be activists." Major evangelical denominations in the United States include the Southern Baptist Convention, theAssemblies of God, the National Baptist Convention, and various Pentecostal churches. Their adherents are estimated to range from 40 million to 75 million, a widely varying figure because of the lack of institutional identity, such as that which exists in mainline Protestant denominations or in the Roman Catholic Church.

What has been their traditional role in U.S. foreign policy?

Christian evangelicals have long been fervent backers of an Israeli state, predating its creation in 1948, but their activism on this issue has been most pronounced in recent years. Another issue they have taken a strong interest in for the past twenty-five years is international family planning. Evangelicals are prominent among the groups that have pressed administrations since the Reagan presidency to withhold funding for population programs that permit abortion.

CFR Senior Fellow Walter Russell Mead writes in the latest Foreign Affairs that the worldview of U.S. politicians tended to be dominated by liberal Protestantismduring World War II and the Cold War. Among those coming from this tradition, he says, were presidents Franklin D. Roosevelt, Harry Truman, and Dwight D. Eisenhower. But evangelical Christians have become more prominent in recent years. Former President Jimmy Carter is one, and experts say President Bush fits the profile of an evangelical Christian, although Bush doesn't describe himself as such.

Experts say their influence has been notable on human rights issues over the past ten years and is growing. Evangelicals, often working with coalitions that involve other Christian groups, secular liberals, and Jews, among others, have played a prominent role in the following issues:

The end of Sudan's north-south civil war. U.S. efforts to end Africa's longest civil war were a response in part to steady campaigning by evangelicals concerned about reports the government in Khartoum was imposing slavery and Islam on the predominantly Christian south. The 2005 peace deal, brokered by former U.S. senator John Danforth, an ordained Episcopalian minister, still holds, although a separate civil conflict in Darfur rages on. Evangelicals are among a number of groups pressing for international action to end the bloodshed in Darfur.

During Bush's time in office, U.S. aid to Africa has risen 67 percent, including $15 billion committed over five years for programs to fight HIV and AIDS. The policy has faced criticism from some health advocates who say its emphasis on abstinence at the expense of efforts such as condom distribution has slowed the response to fighting the disease. Delegates from Africa, speaking at an international AIDS conference in Toronto in August 2006, said the administration's strategy has a mixed record so far.

The International Religious Freedom Act of 1998.

Experts say evangelicals played a key role in the effort to pass legislation making freedom of religion and conscience a top objective of U.S. foreign policy. Under the law, the U.S. State Department set up an agency to advise the government on how countries perform on religious freedom. Countries given poor grades could face economic sanctions and other punitive measures.

The North Korea Human Rights Act of 2004 (PDF). This act required Bush to appoint a special envoy for human rights in North Korea and says human rights in the country should be a "key element in future negotiations between the United States, North Korea, and other concerned parties in Northeast Asia."

The Trafficking Victims Protection Act (PDF). Passed in 2000, the act aims to deter trafficking, punish traffickers, and protect and rehabilitate victims. New legislation signed by President Bush in January 2006 will provide an estimated $360 million over the next two years to fight human trafficking and offer victim protection.

Nancy E. Roman, CFR vice president and director of its Washington program, says this pattern of activism by evangelicals is likely to intensify. "I think in general the Southern Baptist Convention and other organized groups of evangelicals have decided that really it's important to engage politically and certainly in the foreign policy realm," Roman says. "By sheer dint of the numbers, I think the evangelicals are having more of a measurable impact right now" than other religious groups. "Evangelicals," Mead writes, "have given new energy and support to U.S. humanitarian efforts under President Bush."

What is the evangelical stance on U.S. policy toward Israel?

Evangelicals generally view the Middle East through a biblical prism and thus are staunch supporters of Israel, experts say. Richard Land, head of the Southern Baptist Convention's public policy arm, said at a CFR meeting in September 2005 that his group does not "give blind acceptance of everything that the state of Israel does or has done." But he added: "I think it's safe to say that a significant majority of the people who identify themselves as evangelicals believe that God gave the land of Israel to the Jews ... and that God has said that God blesses those who bless the Jews and God curses those who curse the Jews."

Adds Mead, writing in Foreign Affairs: "Many believe that the promise of [the bible's book of] Genesis still stands and that the God of Abraham will literally bless the United States if the United States blesses Israel." But fundamentalist Christians tend to hold more rigid views on policy matters related to Israel than mainstream evangelicals. Some fundamentalists have raised funds to promote the Israeli settlement of the occupied West Bank and Gaza. Some conservative evangelicals disagree with the Bush administration's support for the "roadmap to peace" because it foresees an Israeli withdrawal from the occupied territories as part of a compromise with Palestinians. One prominent fundamentalist evangelical, Pat Robertson, said after then-Israeli Prime Minister Ariel Sharon was stricken with a debilitating stroke in January that it was God's punishment for withdrawing from Gaza.

What is the view of evangelicals toward Muslims?

Reverend Franklin Graham, a leading evangelist and son of Billy Graham, created a stir when he said after the 9/11 attacks that Islam was a "very evil and a very wicked religion." Land, of the Southern Baptist Convention, said at the 2005 CFR meeting that "many evangelicals too easily equate radical Islamic jihadism with Islam" and that his view is that Islam is a "many-splintered thing," much like Christianity. Evangelicals have also supported the Bush administration's campaign to democratize Iraq more consistently than most other domestic groups, according to polls conducted earlier this year by both Pew and Zogby International.

What are some other foreign policy priorities of evangelicals?

Evangelicals have shown an increasing interest in environmental issues, which they call "creation care." In late 2004, the National Association of Evangelicals adopted a platform on civil responsibility that included a section onenvironmentalist activism (PDF). Pursuing the environmental theme further, a group of prominent evangelicals in February 2006 formed the Evangelical Climate Initiative, which they described as a collective effort to encourage action by evangelical Christians and others to make adjustments in their lives to help ease global warming pressures. They released a statement that said human-induced climate change is real, it will disproportionately affect the poor, and that Christians have a moral responsibility to act urgently to address the problem, such as reducing carbon dioxide emissions. CFR's Roman says the new environmental activism, which is challenged by some evangelicals, signals that evangelicals cannot be easily pigeonholed into a political bloc. "The evangelicals do not very neatly align themselves with one policy prescription, there's more diversity than one would think," Roman says.