Ken Behr has a highly personal interest in making sure volunteers at North Way Christian Community are trained to use the portable devices that shock a faltering heart back into a normal rhythm.

In August 2003, Behr, operations director at the church, had a massive heart attack at his home in Seven Fields. A sextuple bypass operation saved his life.

He was supported by congregational prayer and a strong faith and came back to church with renewed interest in the devices, called automated external defibrillators, and in "making sure people knew how to use them," said Behr, 49.

The independent Christian church in Pine now has two of the devices and about two dozen people trained to use them. 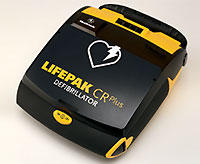 As many as 300,000 automated external defibrillators, which cost $1,500 to $2,500 each, have been put in public places such as stadiums, airports and schools as well as office buildings, according to The Associated Press.

As a place where large numbers of people -- many of them senior citizens -- gather, churches are beginning to obtain the devices as well. Several congregations in the northern suburbs have mounted campaigns to buy defibrillators and make sure that volunteers know how to use them.

Cardiac arrest differs from a heart attack, which is caused by blocked arteries, in that the victim, while in pain, usually remains awake and continues to breath.

External electrical shock, administered by a defibrillator, can bring the heart back to a normal rhythm. Time is critical because when the heart stops, brain damage begins within minutes.

When Behr arrived at the fast-growing North Way Christian Community about 2 1/2 years ago, the church owned one portable defibrillator, donated by a member. "It had been sitting here, and we had nobody trained on it," he recalled. "I said, 'Let's do two things -- make sure it still works and get some people familiar with it.' "

A core group of seven or eight ushers and deacons learned to use the device, he said. When he returned to work a year ago after his heart attack, Behr assigned himself the task of further improving the church's emergency equipment. At his urging, North Way bought oxygen tanks, updated first-aid kits and a second defibrillator, which has been placed in the nearby ministry center, where church offices are located. The ranks of staff members trained to use the equipment has tripled in the past year, he said.

Behr said 2,000 to 3,000 people, many of them senior citizens, take part in programs at North Way on an average weekend.

He praised the simplicity and reliability of the defibrillator technology. "The device actually talks to you, giving you instruction on how to use it," he explained. The system also monitors the patient's condition. If the rhythm of the patient's heartbeat does not indicate cardiac arrest, the device won't allow the operator to administer a shock, he said.

At Christ Church at Grove Farm in Ohio Township, eight members of Primetimers, a group for those age 55 and older, used an unusual method to raise money to obtain a portable defibrillator.

They volunteered to participate in a medical research study on the effectiveness of tetanus booster shots, said co-chairwoman Dorothy Lewis-Kistler. "They were paid $60 for two visits, and they agreed to give that money toward the AED project," she said.

"Our members are the people more likely to have heart problems and get the benefit from the device, so we led the efforts," church usher Christopher Milne said.

In addition to raising money by participating in the study, members donated items and volunteered at a white elephant sale that was part of the church's summer festival. Two members made personal contributions. "One member told me he would hate to see someone pass away because we hadn't bought the defibrillator yet," Milne said.

Impetus for the effort followed a talk about defibrillators to the Primetimers by Dr. Thomas Pangburn, an emergency room physician at Sewickley Valley Hospital. He told his audience that the devices weigh only a few pounds, fit in a space the size of a small suitcase and require minimal training to learn to use.

"Dr. Pangburn reminded us that the AED has to be readily accessible," Lewis-Kistler said. Plans call for keeping the portable defibrillator in a wall-mounted box at the church. Delivery is expected soon.

Choir member Nancy Smith, who is certified in cardiopulmonary resuscitation and defibrillator instruction, will arrange training.

"We hope to have about 20 people familiar with the equipment, including at least one member of all seven usher teams," Milne said.

Training to use the device is provided by the American Heart Association in a four- to six-hour class that certifies participants in Heartsaver AED and CPR. That's because the device may instruct the user to administer CPR instead of shock. A certified trainer conducts classes, and locations can be found on the association's Web site.

Just having the equipment on site will give him and his fellow ushers peace of mind, Milne said. "It's like having fire insurance," he said. "I hope the equipment gets very dusty."

Margie Martinelli, a registered nurse, serves as wellness coordinator for Ingomar United Methodist Church in Franklin Park. She is heading up the effort to get two portable defibrillators for that congregation.

She, too, praised the ease of using the device. "The machine walks you through the procedure," she said. "The paddles, or pads, have pictures on them that show you where to put them. The AED will read the heart rhythm and will tell you whether the patient requires a shock."

The device does multiple tests to monitor the heart rhythm, she said.

Ingomar Methodist has 400 children enrolled in its preschool program, and the portable devices will be fitted with paddles that can be used for children ages 1 through 8. Even a young heart can stop pumping because of electrical shock, a sharp blow to the chest or anaphylactic shock, caused by a bee sting or a severe food allergy.

One family has made an anonymous donation to cover the cost of one portable defibrillator, and the church's United Methodist Women's group has offered a challenge grant for half the cost of the second unit.

As at other churches, Ingomar Methodist plans to train ushers and employees in both CPR and use of the defibrillators. "Most staff members have voiced a desire to learn to use the equipment," she said.

The portable defibrillators should be in place by the end of the year, Martinelli said.

"These devices will send a message to the congregation that we care about you, we want to educate you and we are concerned about your health and well being," she said. "Our mission statement says we seek to care for the mind, spirit and body-- these help to accomplish all three aims."