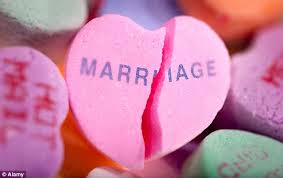 The apostle Paul, writing to the church at Ephesus, laid down some very good guidelines for husbands and wives. To the men he said, "Husbands, love your wives, just as Christ also loved the church and gave Himself for it" (Ephesians 5:25). To the women he said, "Wives, submit to your own husbands, as to the Lord" (Ephesians 5:22). That kind of relationship brings about a lack of tension in marriage.

By the same token, a wife has the ability to make her husband the head of the household by urging him to take his proper role in the home. She should encourage him to seek God, to find out what God is telling the family to do. She can build her husband up and, by being willing to submit, give him a sense of responsibility so that he will assume his proper role.

The one who always insists on "rights" will destroy the marriage relationship. If the husband says to the wife, "You must obey me because the Bible says so," he is going to alienate her. At the same time, the wife who refuses to submit to the husband and fights him all the time will make him apprehensive about following the Lord. He will start thinking, What if I get a message from God? All I am going to get is opposition from my wife, so I might as well just follow my own desires and let her follow hers. Such attitudes will pull couples apart, whereas God's standards should draw them together.

It is important to remember that husbands and wives are partners. Someone has rightly pointed out that woman was taken from the side of man, not from his head or foot. She is not to dominate her husband, nor is she to be supine and let him walk over her as if she were a doormat. A husband and wife are to be partners in life and are to share a living relationship that acknowledges that the man is the head of the family as long as he is submitted to Christ.

In the United States almost 50% of all marriages end in divorce.  It may be likely because many marriages including marriages between Christian people are a 50/50 approach is yielding a 50/50 result.    In marriage a 50/50 arrangement looks something like this: Well, he’s watched the football on TV all afternoon so tomorrow I get to go shoe shopping. Or – She’s just spent money having lunch with her friend so I’m going to get that new cell phone. Or He should have cared that I was feeling down, it’s not fair that he didn’t notice, he owes me.

Those responses are based on the 50/50 principle. If the other one gets something, then I have to get something too – that’s only fair.  It’s about trade offs all the time. But underneath there’s this deep destructive thing called the 50/50 mentality. Her 50 becomes conditional on his 50, his 50 becomes conditional on her 50. This is a relationship based on conditional trade offs. It’s a relationship based, let’s be blunt about it, on what I get out of it.  50/50 is about saying, I’m entitled to my cut of this relationship, I’m entitled to my 50.

How different would your marriage be if your soul-goal was to make sure that your soul-mate got 80, 90 – even 100 – no matter how well they ‘performed’ and no matter how little you feel that you’re getting?

Do you know what that’s called? It’s called love. Unconditional love. Precisely the sort of love that you promised your life long soul-mate on the day you married them.

Likely on the day you married you heard exactly what you promised to do.

Love is patient; love is kind; love is not envious or boastful or arrogant or rude. It does not insist on its own way; it is not irritable or resentful; it does not rejoice in wrongdoing, but rejoices in the truth. It bears all things, believes all things, hopes all things, endures all things. Love never ends.              (1 Cor. 13:4-7)

Half Truths and Whole Lies 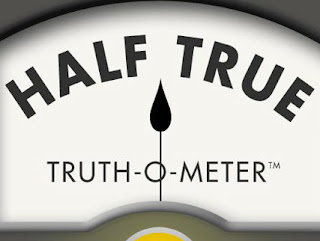 It seems that we all have grown too accustomed to settling for being told ‘half-truths’ that are obviously designed to deceive.   Politicians are likely at the top of the list of ‘half truth’ tellers but ‘half truths’ are also featured regularly on our nightlight news, radio ads, commercials, the internet and even many companies sales reports.

Here are just a few of the obvious ones: ‘Clinton didn’t inhale’, ‘You can keep your doctor’, ‘The Republicans will roll back Obama care’, ‘Peta really cares about the animals’, ‘1 out of 10 people are gay’, ‘The Polar bears are drowning’ and ‘Iran can be trusted.'

The problem with any ‘half truth’ is that they are actually whole lies.

Telling lies makes you a deceiver and a liar.
Lying is a character flaw that in the past would mark you as being untrustworthy.   Unfortunately, lying has become such an acceptable art form that we actually repeat these half truths and admire people that can use words in such a way that they appear to be saying one thing while hiding the actual truth.   The use of ambiguous language that conceals the actual truth should actually be a character flaw, not an admired trait.

The problem with ‘half-truths’ is that they contain enough truth that they can misrepresent fact and are meant to deceive.  Deception has become so common that we actually re-elect, befriend and even admire those that deceive so often they could be considered compulsive liars.

Fortunately, studies have shown that companies that are known for integrity and transparency and are known to be trustworthy actually do better than their peers.  Couples that are honest with each other tend to stay together, remain married rather than divorced and will have fewer financial problems than their ‘half-truth’ peers.

Regardless of  how common deception and ‘half-truths’ are in society, Integrity is likely the single most important character trait you could ever embrace.   Integrity is soul deep and provides the moral compass that actually will ensure long-term success and happiness in life.

Integrity is a catalyst for other important virtues as well.   Virtues such as kindness, generosity, courage, responsiveness and even good work habits are locked-in by the embrace of honesty and integrity.

Embrace integrity.   Integrity today actually is a wonderful way to differentiate your business and your relationships with your friends and coworkers.  When you are known for your integrity it becomes more and more difficult for others to convince you that their half-truths are not actually lies.
- September 14, 2015