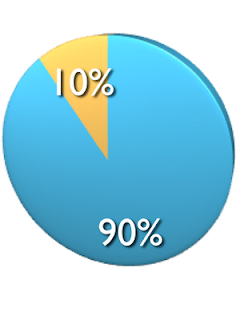 I always smile when I hear someone that claims they are giving it 150 percent.

I certainly understand why they are making the claim, they are trying to communicate clearly that they are extending every effort to accomplish a task.

Most of us understand that 150 percent is arguably impossible. One of the things I teach as well is that 100 percent is also not a good objective when it comes to church processes, procedures and systems. A more reasonable objective is to achieve 90 percent of what is desired as the additional effort to achieve it all requires a huge expenditure of resources, both capital (money) as well as time that can be better used on other endeavors. In fact studies have shown that often 90 percent of the desired result can be accomplished with as little as 10 percent of the effort: A 90/10 solution.

Let’s assume that you are leading a church that is looking into a computer system that has capabilities that include children check-in, small groups, membership, giving and volunteer tracking. Being a good leader you assemble the heads of various ministries, announce to them that you are going to be purchasing and/or developing a new system that handles the handful of tasks you have already identified and invite them to become a member of the selection and implementation team.

After a few meetings, the newly assembled team now has some very specific requirements that includes all of the above plus: historical giving information, archived membership information, a social-media interface that provides both Twitter and Facebook updates, a project management system, the ability to track an unlimited number of designated funds, the ability to record prayer requests, track class registration, import and display family and individual photos and another twenty or so desirable attributes.

If the team was actually insistent about achieving all of their objectives including a desire for the resulting system to be so flexible that anything forgotten can be easily added on in the future, they would find that the cost of implementing the 100 percent solution would be extremely expensive.

However, if they selected a solution that would hit the ground running and provide 90 percent of all of the desired attributes, the costs would be about 10 percent of the 100 percent solution.

It is actually pretty simple to understand that the first 90 percent of almost any project can be accomplished or implemented with about 10 percent of the effort. This applies not only to church computer systems but also decisions that we make on a daily basis. A chef may take a trip to his favorite market possibly in a different city to select exactly the right cut for a dinner party while those of us with more modest expectations can stop at the local grocery store and find something already cut, packaged and priced at a much lower cost.

This 90/10 approach also applies to church construction, video and audio equipment, furnishings and publications. It is much better stewardship of resources to understand that being able to provide a 90 percent solution is not only much more economical but also allows other projects, ideas and ministry wishes to be considered and funded.

"Can't we all just get along" (quote by Rodney King) seems to be the sentiment that comes from the c-o-e-x-i-s-t symbols, bumper stickers and signs that are becoming common today regarding different world religions.

The answer to that question is likely 'yes' and 'no'.

Yes, in our multi-cultural, pluralist society, we should all get along when it comes to respecting the laws, providing equal access and living peacefully with each other. However, if coexisting and getting-along is something more than agreeing to be lawful or peaceful, when tolerance becomes something that requires a person to change their own personal beliefs and practices, then the adherents of coexist are actually encouraging intolerance.

This C-O-E-X-I-S-T symbol is very telling if people truly understand the religious that are represented. These symbols, arranged in a clever way to spell 'coexist' represent Islam, Buddhism, Science, Judaism, Paganism, Wicca and Christianity.

First of all, I love it that science is finally represented as a religion. For years people that have come to the conclusion that this universe, all of creation and all life on this planet are the obvious result of the Divine, have been discredited by the religion of science. We know science must be a religion for it takes much more faith to believe in cosmological chance and coincidence than to believe in a Creator.

My issue with C-O-E-X-I-S-T isn't as much with science as it is with other religions that clearly worship another god. This became very important to me recently, which I'll explain.

In the Qur'an, Allah is never described as 'father' and true Muslims wouldn't refer to Allah as their father. The Qur'an says that Allah has no son, there is no Holy Spirit and that 72 virgins are awaiting the righteous.

Wicca is a pagan religion that worships the Horned God and the Triple Goddess. While there are many different sects and beliefs, they are altogether the antithesis of our Christian culture. Paganism may not be Satanism but it is still earth-centered. Christianity is Kingdom-centered as we are 'aliens and strangers in this world' (1 Peter 2:11).

Buddhism and Hinduism are groupings of eastern religion that have much in common with each other but little in common with the teachings of Jesus. Both embrace reincarnation or transmigration. On the other hand, Christianity and Judaism embrace the unique creation of man, molded in the image of God.

None of these other religions can appreciate the Biblical understanding of our sin nature, our need for a Savior nor our access to a heavenly Father.

As I mentioned, recently I had to address this issue of coexist. I was invited to participate in an interfaith prayer service. I love to be able to pray at a public gathering and love the unity of the Body of Christ but had to decline this invitation. The prayer service included not only Christians but also a Rabbi. I have no issues with Rabbis and since Jesus was also considered a Rabbi and Rabbis worship the same God, I can pray with a Rabbi.

However, I declined to participate in this particular interfaith prayer service as an Imam would also be praying and reading from the Qu'ran. I didn't see anyone listed that would be reading from the Bible (likely an oversight) but I knew that an Imam couldn't possibly be offering a prayer to the same God that the Christians and Jews acknowledge.

My mission as a Christ-follower is to bring clarity and not confusion. My participation would have left the wrong impression on some people that were in attendance. Light cannot coexist with darkness; we cannot serve two masters. Paul tells us in Ephesians 5:11, "Have no fellowship with the unfruitful works of darkness, but rather expose them."

Coexist...absolutely. Pray for them to come to the knowledge of the way, the truth and the light......daily!

Email ThisBlogThis!Share to TwitterShare to FacebookShare to Pinterest
Labels: religion 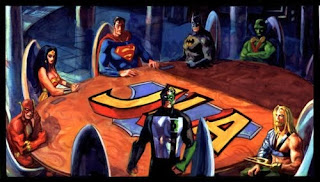 It doesn't surprise me at all that the 'Super-Committee' that was suposed to be coming up with a way to shave $1.5 billion from the national deficit is going to fail. This bi-partisan Congressional committee was doomed from the start.
Committees usually fail.
It has been said that a "Camel is a horse, designed by committee".
All too often, leaders that are undecided, faced with a difficult task and usually unwilling to make a decision will choose to delegate the decision making to committee. Committees, by definition, require a group. They are subordinate to the governing body or leader that appointed them and because the decisions, recommendations and findings are the responsibility of the group and not any individual, personal accountability is avoided.
Many are familiar with the phrase "Death by Committee". In order to avoid major problems in decision making here are three short pieces of advice:
1) Avoid forming, serving on and embracing committees. If deliberation and investigation is necessary, make it the responsibility of one person who can assemble a team to carry the load.
2) Don't confuse collaboration with the need for a committee. Teams often collaborate and all good leaders are collaborative. Collaboration adds value.
3) Make the hard decisions and own them. Difficult decisions are unpopular but that is when true leaders step forward to move organizations and movements forward.