If you do a Google search on Creation vs. Evolution you’ll end up with 98 million results in less than .50 seconds.

It’s too bad there are so many results as there really is no debate.   Evolution is a word that is used broadly by many but is defined narrowly by science. A commonly used short definition of evolution can be found in many science textbooks.  Evolution is defined as the change in the gene pool of a (living) population from one generation to another (source: many dictionaries and the “Hardy-Weinberg Equilibrium Model”)

As such, biological evolution assumes life already exists.  As Bible believing Christians and apologists for creation, our arguments become less impactful when we typically broaden the topic to include not only macro and microevolution but the origins of the universe and life itself.   We take on all comers and are typically not up to the task.

Science feels it has 'certainty', or settled science with regard to evolution (it doesn’t and we’ll address that in a future article).  But with regard to the origins of the universe, it’s a work in progress with many unresolved issues.  The latest generally accepted theory or hypothesis is that the universe began with a ‘Big Bang’.   This is a rather new theory, supported by the observation by Hubble in 1929 that the universe is expanding and moving away at great speed, as if it was propelled by force at some finite point in the past.   However, many scientists, aware of the contradictions in the Big Bang and the generally accepted laws of physics have been busy in publishing other theories.

Why talk about Creation and Evolution?

The Bible begins with the Book of Genesis and verse 1: “In the beginning God created the heavens and the earth.”  The Bible gives us not only the account of the creation of the known universe but also the sun and the moon, all of the plants, animals and man.   In the first eleven chapters of Genesis, we see God’s creation, the fall of Adam and Eve, the judgment for sin, the promise of  Redeemer, the destruction of the world by water and the provision by God for Noah and two of every living creature, and finally the confusion of the languages at the tower of Babel.

Through most of the past two thousand years, these eleven chapters have not only been considered factual but they are also the basis for much of our theology.   No Adam and Eve, no one is in the image of God.  No fall, no sin and no need for a redeemer.  No need for a redeemer and Jesus may have been a prophet but died needlessly.

In addition, while many Christian philosophers have tried to conclude that one way to embrace the scientific theory of evolution and still have God is to become adherents of what they call Theistic Evolution.  Of course this just makes them islands rather than bridges as atheist scientists refuse to accept any inclusion of deity.  The other issue is that in order to find this middle ground, the Bible begins to include both fact and fiction, truth and fables.  Soon, it becomes difficult to sort out God's plan of redemption, the fulfillment of prophecy in the incarnation of Jesus and His second coming.

Answer Questions with the Question

I’ve always admired people that illustrate the bible verse,  “A gentle answer turns away wrath.” (Proverbs 15:1)  I haven’t been a fan of the ‘gotcha’ statements that are often used in these debates.  While you may be able to talk fast and throw in some facts and statements against the uniformed, even the skilled and TV notables don’t always win every argument against the more informed and prepared.

Here are some simple arguments that often are in the form of questions rather than statements of fact.

1) Did you know that microevolution is fully compatible with Biblical Creation?

The Book of Genesis tells us often that God created life forms to reproduce “after their kind”. (e.g. Genesis 1:24) This embraces a great deal of  variety within the ‘kind’.   However, God’s creatures will always only reproduce after their same general “kind” of animal.   Don’t get confused by the technical definition of species vs. the general reference to kind as that’s exactly what we see today. For example, dogs and wolves are both canines and can actually interbreed.  They are of the same ‘kind’.  However, pigs and sheep cannot interbreed because they are not the same kind.   Interestingly, scientists have used this Biblical definition to narrowly define a species as species is defined as having the ability to reproduce “after their kind” (emphasis mine).

2) Scientists acknowledge that Darwin’s theory of evolution is actually in crisis and at the ‘origin level’, not embraced

The amazing discoveries in molecular biology, biochemistry and DNA that have been made in the past 50 years expose Darwin’s fears.  He surmised that complex organs like the eye to be formed by natural selection would be absurd.   We now know that there are in fact tens of thousands of irreducibly complex systems on the cellular level and even the tiniest bacterial cells are composed of one to two hundred million atoms, far more complex than our most advanced man-made machines.   Regarding DNA, my daughter, a Ph.D candidate and science teacher says that DNA shows the ‘fingerprints of God, the creator”.

3) Were you aware that the fossil record raises more questions than provides answers?

From a Christian perspective, a global flood would explain to a greater degree the existing fossil record than those trying to prove an evolutionary tail.  The fossil residue in what are believed to be the oldest rocks does not reveal a simple beginning at all but instead a very complex living record consistent more with the Christian perspective of creation than the origin of species via evolution

4) The generally assumed ‘age of the earth’ of 4.53 Billion years has serious unresolved problems

As Darwin’s claims of natural selection and evolution were only mathematically probable over millions of years, the idea of a ‘young’ earth while supported by the Bible is unthinkable to most scientists.  However, there are a number of observed ‘time clocks’ that point to a much younger earth than the normally assumed 4.53 Billion years.  Including:

Not So Final Thoughts

While many may give more, I prefer to give people less and have them want more.  The source of truth for me has been and always will be the Bible.  Many men, far more knowledgeable in both science and the Bible have written on this subject.

We’ll take two more weeks and review some more questions and problems with the popular scientific models of the origins of life, the universe an the age of the earth.  In the meantime, be gentile and turn away wrath.
- October 31, 2015

What is the Gospel? 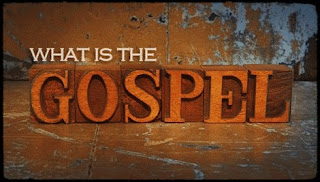 If people are asked, ‘what is the Gospel?’  there would undoubtedly be many different answers.    I know that for a long time I would reply that the Gospel is the “good news” as I had learned that the word gospel was in fact a translation of the Greek word for ‘good news’.

However, "What is the Gospel" is an all-important question and the reason I’m mentioning it is not to criticize any particular answer, as there are many ‘right’ answers to the question, but to remind us all that it is the Gospel that is the essential truth that actually unites all believers as the Body of Christ.

Paul tells us what the Gospel is

The Apostle Paul wrote to the Christians in Corinth in response to what appears to have been a number of questions that they had regarding not only beliefs but practices and the structure of the church.   In his first letter to these Christians at Corinth he defines the actual gospel that he had preached to them as well as well of all the other churches that he founded:

Now I would remind you, brothers, of the gospel I preached to you, which you received, in which you stand, 2 and by which you are being saved, if you hold fast to the word I preached to you—unless you believed in vain.
3 For I delivered to you as of first importance what I also received: that Christ died for our sins in accordance with the Scriptures, 4 that he was buried, that he was raised on the third day in accordance with the Scriptures, 5 and that he appeared to Cephas, then to the twelve. 6 Then he appeared to more than five hundred brothers at one time, most of whom are still alive, though some have fallen asleep. (1 Corinthians 15: 1-6)

This gospel truth is fortified when Paul talks about the witnesses of these events; that the apostles had seen the risen Christ but also there was five hundred at one time.

Development of our Creeds

The early church took these truths, encapsulated and developed them in what we know now as the Nicene Creed and also the Apostles Creed.  These Creeds contain these essential truths that to this day are the identifying marks of a disciple of Jesus Christ.

When we embrace these truths, this Gospel that the Apostle Paul recounts, we not only experience unity within the diverse Body of Christ but we also experience revival.