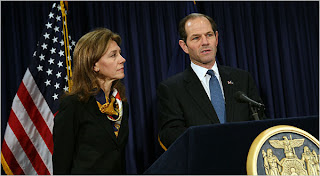 It didn't take too long after the Elliot Spitzer scandal broke to have a gaggle of talking heads on television speaking about everything except the actual scandal. The breach of ethics and integrity and the troubling moral recklessness of one of our Nation's top elected officials seemed to be only a starting point and excuse to talk of "victimless crimes", "entrapment" and an "overly aggressive prosecution".

On a personal note, I'm truly sorry for Governor Spitzer and his wife and teenage girls. Moral failure hurts everyone connected even remotely to this family and it definitely becomes a significant and unfortunate defining moment for a brilliant career.

Has anyone noticed that integrity is actually quite resistant to a liberal press, a godless social agenda and a permissive society? Why was it apparent to everyone from the onset that the once proud Governor of New York would have to resign from public life?

The answer to the question is found in Romans 2:12 where Paul says, "For as many as have sinned without law will also perish without law, and as many as have sinned in the law will be judged by the law". The Bible has a number of very clear messages and one of them is that those things that are honorable and right and true are naturally known to all of mankind. Doing that which is morally right and true creates blessings, harmony and peace, both now and for eternity.

Despite the efforts of many in society to redefine integrity, the vast majority of people in the United States still thankfully understand the basic difference between right and wrong. Regarding this effort by some to redefine integrity, I find it not coincidental that the organization that has grabbed the use of the IntegrityUSA URL is in fact a website that promotes, "A witness of God's inclusive love to the Episcopal Church and the lesbian, gay, bisexual, and transgender". community.

Regardless of the efforts by many to redefine integrity to mean something that may be more convenient for various permissive and quite frankly sinful lifestyles, integrity is entirely about the development of a character that is based on Biblical principles. These principles are many, including avoiding improper sexual conduct, faithfulness to one's spouse and also strong admonitions about being very careful in judging others "less you yourself are judged" and "getting the log out of your eye before you mention the speck in your brother's eye".

There are very few "victimless crimes". I can think maybe of jaywalking on a deserted street or talking on a cell phone while driving in Washington DC (I confess I've been guilty of the latter) but typically the laws of the United States reflect the mores, standards and the Biblical principles that are known to be appropriate for society.
- March 14, 2008